This site uses cookies. By continuing to use this site you consent to our use of cookies. more info | ok
british special forces » royal marines » 3 commando brigade » 59 independent commando squadron royal engineers
▼ share this page

59 Indep Cdo Sqn RE is made up of volunteers from the British Army's Royal Engineers and form a key part of 3 Commando Brigade. Their main role is to provide combat engineering support to the brigade. This includes the construction or destruction of fortifications, bridges and roads, the laying and clearing of mines and neutralizing IEDs. The Sappers of 59 Indep Cdo Sqn RE go through full commando training, including the All Arms Commando Course, and can be drawn on to perform the traditional infantry role. 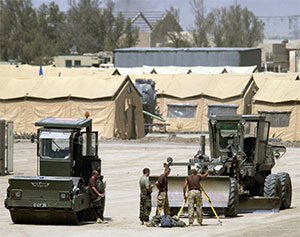 Royal Engineers use heavy equipment such as these air-portable tractors and bulldozers.
US DoD photo by: SSGT SHANE CUOMO, USAF

The Squadron consists of a Headquarters(HQ) element, a reconnaissance troop, 3 field troops, a support troop and a REME workshop.

Support Troop looks after the vehicles required by the other troops, including tractors and bulldozers. Support troop divers can carry out underwater engineering / demolitions tasks down to 50 meters.

The men in 59 Indep Cdo Sqn RE Training go through full Commando training :