This site uses cookies. By continuing to use this site you consent to our use of cookies. more info | ok
british special forces » special air service » sas operations » peterhead prison
▼ share this page

A riot in Peterhead Prison's D-wing had resulted in prisoners taking over the building and taking a prison officer, 56 year old Jackie Stuart, hostage. The hostage-takers were lifers, in prison for violent crimes. It was thought that they had nothing to lose and would not hesitate to make good on their threats to kill their hostage, whom they had now taken up to the rafters of the Scottish prison.

Feeling unable to intervene without putting their colleague's life at risk, the prison authorities called for help from the SAS. It was a controversial request. Sending in UK special forces to deal with a domestic criminal situation would set a dangerous precedent, and several politicians were against it. At first, an SAS officer was sent to Peterhead in a purely advisory role. As a stalemate ensued at the prison, the call was eventually put out to send in the SAS to rescue Jackie Stuart and end the siege.

About 20 men from the on-call anti-terrorist team were flown from RAF Lynham in a C-130 up to Aberdeen, then driven under police escort to Peterhead Prison, where they setup for the assault.

The SAS assault teams were kitted out in body armour, fire-proof coveralls, respirators, plus, as the assault plan called for a stealth approach, they wore trainers instead of the more commonly worn army boots. Their primary weapons were wooden batons but they also carried 9mm Brownings as backups. Each team also carried flashbangs and tear gas canisters. 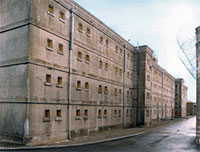 The plan was to hit the prison from all sides simultaneously, causing confusion and panic amongst the prisoners whilst a rescue team entered the roof, the hostage location, via a hole the prisoners had made themselves. At 5am, as 4 SAS men snuck across the prison roof. Other prisoners in overlooking cell blocks spotted them and called out to warn the hostage-takers. At that moment, on each of the 3 floors of D-wing, an SAS team blew their way in with explosives, hurling in CS gas and stun grenades, before rushing in to clear the cells. Above them, the 4-man rescue team, threw stun and CS grenades through the hole in the roof then quickly jumped down into the rafters and secured the hostage, who was shocked but unharmed. The prisoners had been too stunned by the force and speed of the SAS assault to put up any meaningfully resistance. The hostage was quickly hauled out of the gas-filled prison to safety whilst the SAS handcuffed the prisoners. In short time, the prison authorities came in, reclaimed the building and took charge of the inmates, whilst the SAS quickly melted into the shadows.