This site uses cookies. By continuing to use this site you consent to our use of cookies. more info | ok
british special forces » weapons » law 80
▼ share this page

The LAW 80 fires a 94mm shaped High Explosive Anti Tank (HEAT) warhead capable of penetrating 650mm of armour on main battle tanks (MBTs) up to a range 500 meters. An unusual feature of the LAW 80 is a built-in 9mm spotting rifle that is used to mark the target prior to the launch of the warhead.

When stored, LAW 80s resemble dumbells, with large caps covering each end of the tube. Before firing, these caps are removed and the tube is extended.

British forces have used the LAW 80 against Iraqi armour during Operation Telic, 2003. The SAS have been known to carry LAW 80s on their 110 Land Rovers (see photo). British troops in Afghanistan have been using the ILAW over the LAW 80, due to its smaller size and weight, or the Javelin guided missile.

The LAW 80 is due to be replaced by an improved system with an increased range and lethality, known as NLAW. 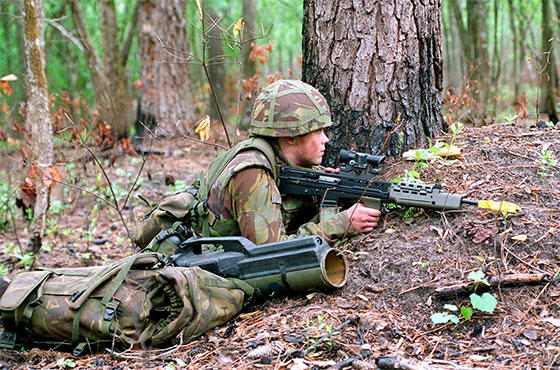 A Royal Marine armed with a SA80 assault rifle with a LAW 80 rocket launcher by his side.
DoD photo by: LANCE CPL. R. L. KUGLER, JR.