This site uses cookies. By continuing to use this site you consent to our use of cookies. more info | ok
british special forces » news » sbs deploy to persian gulf
▼ share this page

The Daily Star newspaper today reports that Special Boat Service (SBS) personnel have deployed to the Persian Gulf amid rising tensions between the West and Iran.

According to the newspaper, the SBS will be protecting British Royal Navy minesweepers which are active in the region. The SBS will protect the minesweepers themselves and any small boat parties that may be sent out to investigate mines. Royal Navy personnel from P Squadron of the Fleet Protection Group would typically provide security for Royal Navy minehunters.

The additional security measure of deploying special forces aboard British vessels is apparently designed to prevent a repeat of the humiliating capture of Royal Navy sailors and Royal Marines by Iranian forces in 2007. 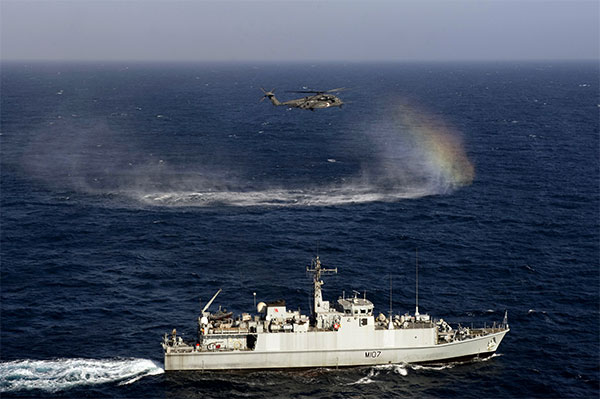 HMS Pembroke - a Royal Navy Sandown class minesweeper - pictured during a 2011 exercise in the Gulf. Ships such as Royal Navy minesweepers will likely be used to counter attemps by Iran to shutdown the transit of oil tankers and other shipping through the chokepoint at the Strait Of Hormuz.
U.S. Navy photo by Mass Communication Specialist 1st Class Lynn Friant/Released