This site uses cookies. By continuing to use this site you consent to our use of cookies. more info | ok
british special forces » gear » misc kit » satellite communications
▼ share this page

Tactical satellite communications (tacsat) use low orbiting communications satellites to relay radio signals between operators. The advantage to this method is the ability to communicate in remote areas out of reach of terrestrial transmitters. UKSF and elite forces are making increasing use of tacsat gear, especially when operating in Afghanistan and Iraq.

Satellite communications at the infantry level were introduced during the 1982 Falklands conflict when the SAS borrowed some kit from the US Delta Force for use in the war. The Satcom units allowed SAS units operating on the islands to communicate directly with their home base at Hereford, as well as their local HQ onboard the helicopter carrier, Hermes, part of the British naval task force. Whilst tacsat gave the SAS an edge during the conflict, some within the Regiment began to see the radios as something of an albatross, as it actually allowed Hereford to 'interfere' directly with SAS operations as they were underway, whereas previously the lack of direct comms gave the SAS forces on the ground more autonomy. 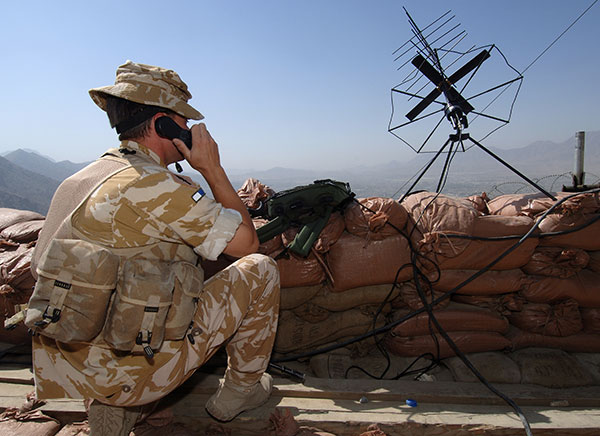 A member of ISAF ICN Signals Support Group sets up a PRC-117F radio.The PRC-117 is a multi-band radio capable of VHF, UHF and tactical satellite (tacsat) UHF communications and is reportedly in use with UKSF.
image by WO2 Fiona Stapley  | © UK MOD / Crown Copyright 2022
Used under Open Government Licence