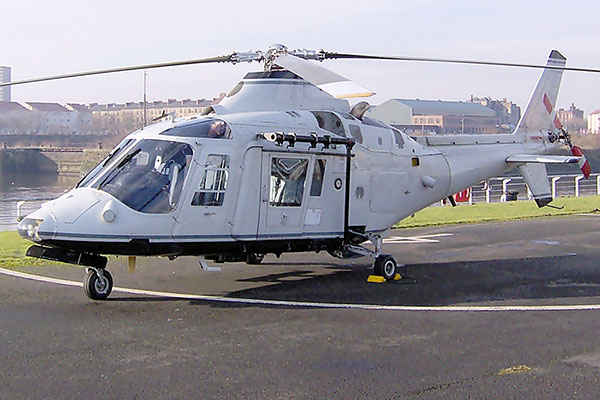 This helicopter was one of two captured from the Argentinians during the 1982 Falklands Conflict. Other A109s were purchased and bringing the 8 Flight fleet up to 4 airframes. This secret AAC unit was stationed at Hereford to provide the 22nd Special Air Service (22 SAS) with a dedicated rotary air wing. The A109s of 8 Flight used civilian-style paint jobs in order to blend in with normal air traffic, enabling SAS troops to move covertly on domestic operations.

One of 8 Flight's roles was to support 22 SAS's counter terrorism mission. 8 Flight A109s could be fitted with a roping frame to facilitate fast-rope insertion by the SAS Special Projects Team. Such a frame is visible in the above pictured, fitted above the port cabin doorway. This frame allows for a Mk4 deplaning rope (40 ft, 50 ft, 60 ft or 90 ft length) to be attached and used. The frame features a Quick Release Mechanism (QRM) which allows for the rope to be disconnected in an emergency.