This site uses cookies. By continuing to use this site you consent to our use of cookies. more info | ok
british special forces » royal marines » 3 commando brigade » brigade reconnaissance force
▼ share this page

A special reconnaissance unit within 3 Commando Brigade, Royal Marines, the Brigade Patrol Troop (BPT) will insert ahead of an amphibious landing or other RM operation to gather intelligence on the surrounding area.

The Royal Marines of the Brigade Patrol Troop are comparable in role and proficiency to the PARA's Pathfinder Platoon and whilst not technically special forces, are certainly an elite within an elite. In addition to full Royal Marines training, the Marines of the BPT are also parachute trained.

The Brigade Patrol Troop is part of Surveillance and Reconnaissance Squadron, 30 Commando IX (Information Exploitation) Group. The BPT consists of a troop HQ and 4 6-man teams. Each team is made up of :

The BPT will often deploy alongside other specialized units, forming the Brigade Reconnaissance Force (BRF). The BRF typically consists of:

The Brigade Reconnaissance Force may also include recce elements from Army units that are also deployed in the same theatre. 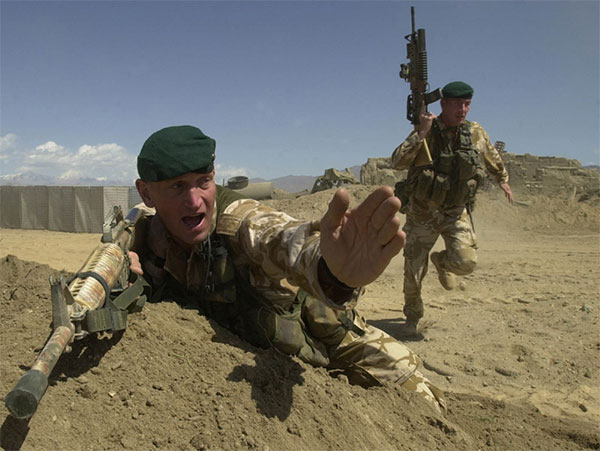 Royal Marines with the Brigade Patrol Troop (BPT) hone their combat skills, Afghanistan, 2002. Note the Diemaco C7 5.56mm x 45mm rifles carried by the Royal Marines. The BPT were issued with m16a2/C7 rifles during the late 90s / early 00s but have since reverted to same SA80A2 rifle used by the rest of 3 Commando Brigade.
© UK MOD / Crown Copyright 2002
Used under Open Government Licence