This site uses cookies. By continuing to use this site you consent to our use of cookies. more info | ok
british special forces » news » sas guard harry during bastion attack
▼ share this page

SAS Protected Prince Harry during Taliban Attack On Base

SAS bodyguards protected Prince Harry during a recent Taliban attack on Camp Bastion, Afghanistan, it has emerged. According to the Daily Mirror, Harry's close protection team, thought to be troopers from 22 SAS, whisked the Royal away from the pilot's lounge to a fortified location in the base.

The attack happened at 10pm local time, Friday night. The Taliban, disguised in American uniforms, attacked the airfield section of the sprawling US / UK base, killing 2 U.S. Marines and destroying a number of jet aircraft. 14 Taliban attackers were killed and 1 captured in a counter attack by 5 RAF Force Protection Wing (51 Squadron RAF) and U.S. forces.

The Taliban have claimed that the operation specifically targeted Prince Harry, who's recent deployment to Afghanistan as an Apache co-pilot/gunner has been widely publicised. An Mod source, however, told The Sunday Telegraph: “This was a determined attack which achieve its aim of getting global press coverage. They are masters of propaganda. But they are deluded if they really think they can storm Camp Bastion and kill or seriously injured Prince Harry. The attack was never going to succeed but in reality that was never really its aim.” 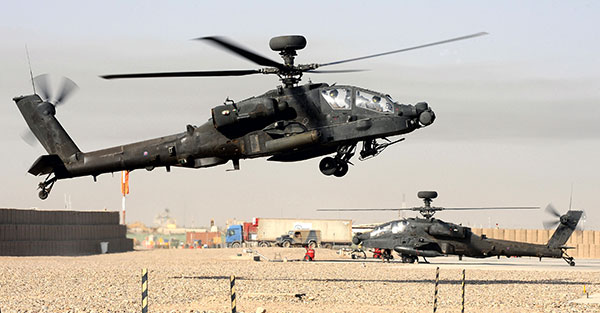 An Army Air Corps WAH-64 Apache helicopter lands at Camp Bastion. Prince Harry, otherwise known as Captain Wales, is deployed to Afghanistan as an Apache co-pilot gunner. He has previously served as a JTAC in Helmand Province, a deployment that was announced after the fact.
Image by POA(Phot) Mez Merrill | © UK MOD / Crown Copyright 2022 | used under open government licence