This site uses cookies. By continuing to use this site you consent to our use of cookies. more info | ok
british special forces » news » did the SAS help catch gaddafi?
▼ share this page

Did The SAS Help Catch Gaddafi?

It's been an open secret for some time that British special forces, including small teams of soldiers from the 22nd Special Air Service and MI6 intelligence operatives were on the ground in Libya. They were supposedly deployed in an 'advisory role', which entailed liaising with rebel forces, providing communications and intelligence support and assisting in coordinating rebel (NTC) movements with NATO air strikes.

Since the fall of Tripoli in late August, British special forces have concentrated in assisting the rebels in mopping up remaining pockets of Gaddafi loyalists, such as those in Sirte, as well as hunting for Colonel Gaddafi himself.

Last week, as NTC forces pushed into Sirte, their SAS advisors urged rebel commanders to cut off any potential escape routs out of the city. Attempts to do so were not completely successful as a convoy which included a car carrying Gaddafi, managed to punch a hole through the rebel lines and make it to the outskirts of Sirte, heading for open desert.

Unfortunately for Gaddafi, his convoy was spotted by a US MQ-1 drone which fired a Hellfire missile at the lead vehicle. French warplanes were subsequently called in and attacked the convoy, dropping 500lb laser-guided bombs. Wounding in the attack, Gaddafi sought refuge in nearby sewage pipes, where he was later found and killed by an angry rebel mob.

According to mainstream sources, advising rebel forces in setting up a cordon around Sirte was the full extant of involvement by British special forces in Gaddafi's capture. Some quarters, however, believe that it was in fact foreign special forces, either British, French of Qatari, that actually found and wounded Gaddafi before pointing his location to the rebels, thereby providing them and free Libya with a much needed 'psychological victory'. (see last two links, bottom of page) 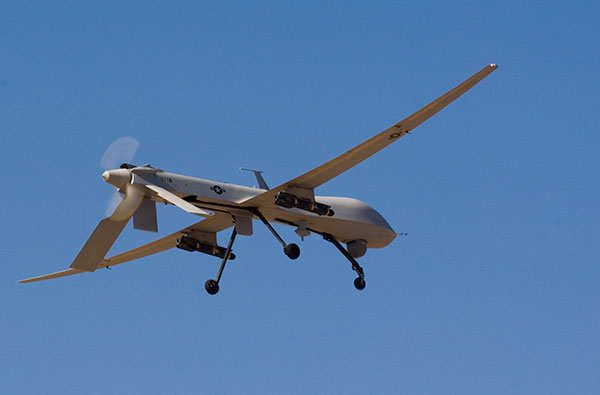 Gaddafi's convoy was found and attached by a US Air Force MQ-1 Predator drone. The MQ-1 is flown by satellite relay by an operator stationed in the US. It carries a suite of sophisticated surveillance equipment and is armed with AGM-114 laser-guided anti-tank missiles. It can loiter high above a target area for up 18 hours.
US DoD Photo by Tech. Sgt. Erik Gudmundson