This site uses cookies. By continuing to use this site you consent to our use of cookies. more info | ok
british special forces » news » 1 PARA (SFSG) parachute raids
▼ share this page

28.12.2010 - Paras have jumped into action in Afghanistan in recent months, marking the Parachute Regiment's first combat drops since the Suez crisis in 1956. Parachutists from 1 PARA (SFSG), the core component of the Special Forces Support Group, have parachuted into Helmand Province on Company-level raids against Taliban forces. The Paras used low-level parachutes to jump from from low-flying RAF C-130s.

Along with 1 PARA (SFSG), which is carrying out special operations, 2 and 3 PARA, with elements of 4 PARA are deployed in Afghanistan as part of 16 Air Assault Brigade for Operation Herrick XIII.

related info: 1 PARA (SFSG) were in the news in September when it emerged that several Paras from the unit had been injured when an RAF Hercules aircraft had accidently dropped them into trees during a training exercise. 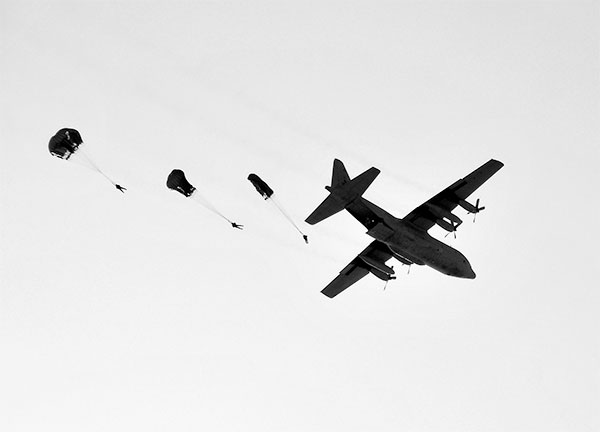 Parachutists jump from a C-130. Jumping from a low flying Hercules at night allows a sizeable fighting force to quickly get on the ground and hit a target or secure an area before the enemy has time to react.
photo : US DoD

While most airborne operations in Afghanistan are heli-borne, parachute jumps, while rare, have happened: