This site uses cookies. By continuing to use this site you consent to our use of cookies. more info | ok
british special forces » gear » vehicles » warthog
▼ share this page

The Warthog is a twin-chassis all-terrain amoured vehicle in service with the British Army, including in support of 16 Air Assault in Afghanistan. The Warthog is similar in concept and appearance to the lighter BvS 10 Viking, a vehicle it has, since 2010, replaced in UK service in the Afghanistan theater.

The Warthog is a variant of the Bronco All Terrain Tracked Carrier (ATTC) manufactured by ST Kinetics. The vehicle features 2 cabs coupled together by an articulated joint, both running on rubber caterpillar tracks, the forward cab acting as the tractor. The forward cab is crewed by 3: commander, driver and a gunner. A protected weapon station atop the front can can accommodate a a General Purpose Machine Gun (GPMG), Heavy Machine Gun (HMG) or Grenade Machine Gun (GMG).

The Warthog is designed to be highly mobile, while still offering protection for those inside. The low ground pressure of the rubber track design gives the Warthog a high degree of mobility over various terrain. The Warthog can be transported by air, sea, road, rail and by landing craft.

A number of modifications to the base Bronco model were made to the variant deployed by British forces:

The Warthog comes in a number of variants to fulfill different roles:

The Warthog was first deployed to Helmand Province, Afghanistan with the 2nd Royal Tank Regiment (2 RTR) as the 'Warthog Group' in late 2010. 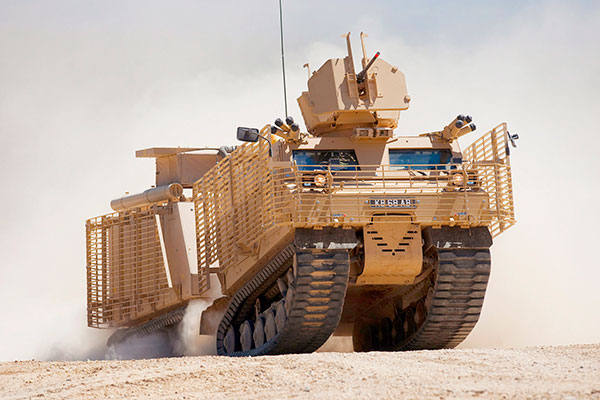