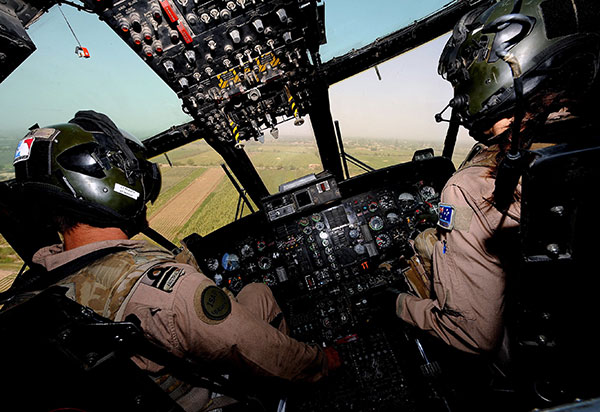 The view from within a Sea King Mk4+ of Naval Air Squadron (845 NAS), Commando Helicopter Force (CHF) as it flies over Helmand Province, Afghanistan, 2011.

Sea Kings from 845 NAS and 846 NAS were deployed to Afghanistan between 2007 and 2011. During their deployment, the CHF Sea Kings notched up more than 12,500 flight hours, transporting 80,000 troops and 700 tonnes of supplies during 3,800 sorties flown from their base at Camp Bastion.

The helicopters received new rotor blades that provided extra lift and allowed them to operate in the hot and high conditions of the Afghanistan theatre. They also were fitted with an additional door gun, an improved defensive aids suit and the Elbit Systems Digital Night Vision Goggle (D-NVG) package. The D-NVGs display engine, flight and navigation data through the goggles, enabling the pilots to fly with eyes out of the cockpit when needed. The upgraded airframes were designated Sea King HC4 (Plus).