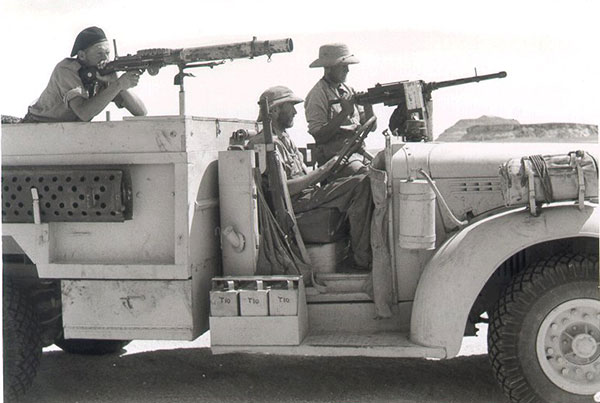 <<<24 of 48>>>^ gallery+ enlarge
Vintage photo of the Long Range Desert Group (LRDG). The LRDG was British Army special forces unit that was active during World War 2 in the North African campaign against the Axis powers. The unit specialized in mechanized reconnaissance and intelligence gathering. The LRDG were highly skilled at navigating across the vast deserts and operating for long periods, without support, behind enemy lines. Their reputation for desert navigation and self-reliance led to them being tasked with the transport of Special Air Service personnel and other commando units on missions behind enemy lines.. The LRDG used a range of vehicles that were modified for their purposes. Pictured above is a 1533x2 Chevrolet with LRDG personnel manning a Lewis machine gun (rear) and an Italian Breda-SAFAT aircraft gun (front). The Long Range Desert Group would often mount captured Axis weapons on their vehicles.