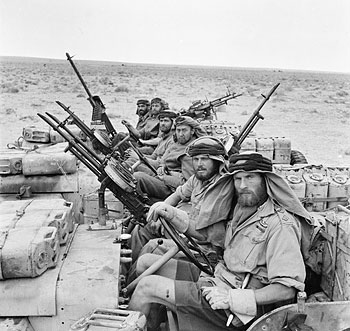 <<<23 of 48>>>^ gallery
Special Air Service troops pictured in the North African desert during World War 2. The favourite jeep-mounted weapon of the SAS was the Vickers K machine gun, often mounted in pairs. The Vickers K was designed as an air-to-air weapon fitted to British aircraft. Firing a mixture of .303 armour-piercing, tracer and incendiary rounds, the Vickers K was ideal for shooting up parked enemy planes, something the SAS did to great effect during the War.
« back to UKSF gallery
advertisements
PASS SELECTION