This site uses cookies. By continuing to use this site you consent to our use of cookies. more info | ok
british special forces » uksf aviation » 47 squadron » libya rescue
▼ share this page

At that time, Libya was in the grips of a civil war, with rebel militia fighting Colonel Gaddafi's government forces for control of the country. As rebels made westward gains from their strongholds in the eastern areas, the security situation of foreign - including many British - oil workers at a series of remote desert installations grew steadily more fragile.

Eventually the British government made the decision to rescue the workers and a plan was put into effect on Saturday the 26th.

British forces would stage the operation from Luqa airport in Malta, sitting as it does across the Mediterranean from Libya.

A number of 7 Sqn Chinook helicopters [1] and at least four 47 Sqn Hercules - a mix of older Hercules C3 and newer Hercules C4 and C5 aircraft - were operating out of the airport.

Footage of one of the RAF C-103Js used in the rescue operation at Luqa, Malta
video by Antoine Galea | via skynewsyourvideos youtube channel

Prior the desert rescues, 47 Sqn had flown a single evacuation flight between Malta and Libya. On the preceding Thursday (the 24th), 64 people (51 British) were extracted from Tripoli International Airport.[2] In contrast to the unauthorized incursions into Libyan airspace that were to follow, this first flight was a straightforward affair. The rescue flights into the remote desert locations would require the ground to be prepared ahead of time.

Some press reports say that an advance party of SAS and/or SBS had infiltrated into the country several days before the rescue flights. Some reports say they arrived covertly on civilian flights, before collecting weapons and kit from the British embassy in Tripoli.[3] Other reports suggested they came ashore with HMS Cumberland when it docked at Benghazi.[4] Their role was to prepare the ground for the Hercules flights. This included meeting up with the trapped workers, negotiating airfield usage rights from local militia and arranging safe passage of the workers from their camps to the airfields.

According to a Sky News report, the UKSF contingent on these operations were from C Squadron of the Special Boat Service (SBS), who had been pulled off Maritime Counter Terrorism standby for this task.[5]

The extraction teams moved to the Naffora oil field airstrip before splitting into two groups, one heading for an oil compound at Waha and the other for one at Amal. The teams subsequently escorted the oil workers to nearby two militia-held airfields. [4] 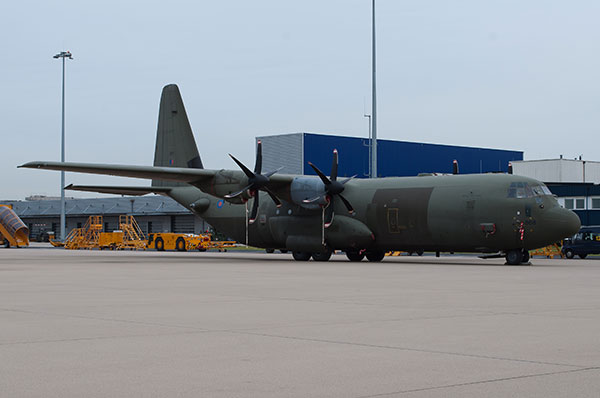 One of the aircraft used in the rescue flights was a Hercules C4 with reg ZH868. The C4 is a 'stretched' version of the C-130J which features a longer than normal fuselage. Special Forces Hercules carry sophisticated threat detection and countermeasures systems to protect against radar-homing and heat-seeking anti-aircraft weapons - very much needed when penetrating foreign airspace without permission, as on the Libya rescue flights.
image by Flickr user Gerard van der Schaaf | used with Attribution 2.0 Generic (CC BY 2.0)

The first airlift mission took place on Saturday February 25th. Two Hercules took off from Luqa and flew south over the Mediterranean, heading for Libya. As they had no pre-arranged permission to be in Libyan airspace, the Hercules crews radioed Tripoli air traffic control and reported themselves as an humanitarian flight.

As the two Hercules pressed on into Libyan airspace, an RAF E-3D Sentry aircraft kept watch over them, scanning for any threat to the aircraft. The operation was taking place over the eastern, rebel-controlled parts of Libya so the threat from government aircraft or ground-to-air defences should have been minimal. That said, it was not known how many Gadaffi's anti-aircraft systems may have fallen in to rebel hands and what threat that might pose to two anuathorised aircraft flying overhead. 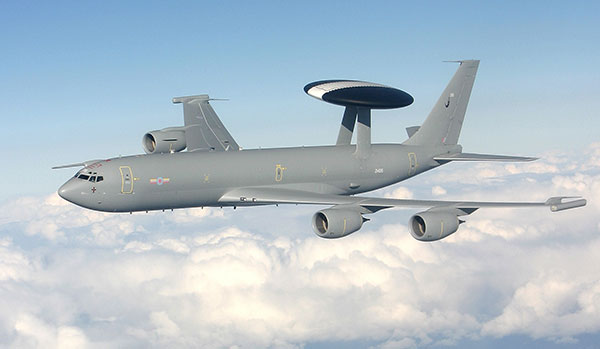 A RAF E-3D Sentry 'Eye In Sky' was on station throughout the rescue flights.
image by RAF  | © UK MOD / Crown Copyright 2012
Used under Open Government Licence

The Hercules flew in to the pre-selected desert airstrips - one plane at each - without major incident. Each plane had a small team of UKSF troops aboard to provide security once on the ground.

As the oil workers loaded onto the aircraft, the security situation at both airstrips began to slowly unravel, with the somewhat unpredictable local militia beginning to turn hostile. In the end but both flights were able to safely take off and fly back to Malta.

In total 176 people (including 74 Britons) were evacuated during the first flights.

Footage from within the cockpit and on the ground of the initial rescue flights, including take off from Malta and landing at one of the remote airstrips.
video via GlobalNewsAgencyuk youtube channel

The next day, Sunday the 27th of February, a second mission was launched. This time it involved three Hercules flying to two airstrips.

This second run did not quite as smoothly as before. Some of the destination airfields had been blocked with oil drums and alternates had to be used. As it took off, one of the Hercules was mistaken by militia for a government aircraft and was shot at. A couple of bullets entered the Hercules' cockpit, one even bounced off a pilot's helmet but, luckily, no one was hurt and the aircraft made it safely back to Malta.