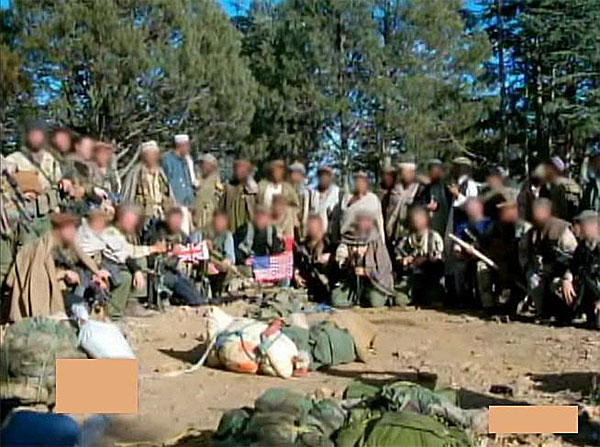 <<<30 of 48>>>^ gallery
photo from wikimedia commons | public domain image
Special Boat Service (SBS) personnel soldiers from the US Army's elite Delta Force pose for a photo during the December 2001 operation to kill Osama Bin Laden in the Tora Bora region of Afghanistan. Following the initial rousting of the Taliban by coalition forces, a large number of Al Qaeda forces, thought to include Bin Laden himself, had taken refuge in the mountainous Tora Bora area, close to the border with Pakistan.

Delta Force were tasked with preventing Al Qaeda from escaping into Pakistan. It was an extremely hard task due to the nature of the terrain. Anything other than movement on foot was impossible and there were few usable routes into the mountains and Al Qaeda fighters would be defending each one.

As the operation began to take shape, members of the SBS were drafted in to assist. A total of 12 SBS commandos, supporting signals personnel and intelligence support from at least one MI6 operative, joined the ongoing Delta Force operation which was also supported by Army Special Forces and Northern Alliance (NA) troops..

Initially, SBS operators joined small teams working in observation posts (OPs) on the high ground. Using SOFLAM laser designators, these teams called in air strikes from attack aircraft, including AC-130 gunships, clearing the Al Qaeda defenders. As the routes became clear, small SBS teams joined Delta Force and the NA troops on a slow but steady push into the enemy's strong hold, establishing more OPs and calling in more air strikes as they went. By the time the mountains were declared clear of the enemy, hundreds of Al Qaeda troops were believed to have been killed by air strikes called in by US and British commandos with many others captured. The big prize, however, namely Osama Bin Laden, had managed to make good his escape into Pakistan.

Efforts to nab Bin Laden were ultimately frustrated by politics. Delta and the SBS were too small a force to carry out the operation alone and so were forced to placate the Northern Alliance warlords in order to secure the support of their troops. The NA soldiers were not comfortable fighting at night and frequently relinquished ground captured during the day in order to return to base when it got dark. When it seemed as though Bin Laden was cornered, the NA leaders prevented their forces closing in for the kill, pushing for a truce instead. The difficulties and delays caused by the strained relationship between the western special operations forces and the Northern Alliance contributed to the eventual failure of the operation.

read more about the operation in Tora Bora in the account written by the on-scene Delta Force commander, Dalton Fury :
Kill Bin Laden: A Delta Force Commander's Account of the Hunt for the World's Most Wanted Man