This site uses cookies. By continuing to use this site you consent to our use of cookies. more info | ok
british special forces » 18 (UKSF) signals
▼ share this page 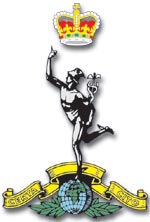 18 (UKSF) Signals is part of the Royal Corps of Signals

Created in 2005, along with the SFSG & SRR, 18 (UKSF) Signals Regiment is one of Britain's newest special forces units. It's remit is to provide signals support to other UKSF elements, such as the SAS and SBS.

The Regiment contains other pre-existing UKSF signals units such as:

Other sub-units of 18(UKSF) Signals include:

Men of 18 (UKSF) Signals are highly trained in all aspects of communications. Since they may be expected to accompany UKSF units on operations, they are also trained in various specialised military techniques such as parachuting and escape and evasion.

Weapons employed by the various 18 (UKSF) Sigs units include:

Selection for 18 (UKSF) Signals is open to all serving members within the UK military with the following qualifications :

A 5-day induction proceeds the main selection during which candidates get an idea of what to expect. Main selection comprises of a 24 week Special Forces Communicator (SFC) course, run in March,
April, August, and October, each year.

Sadly, several 18 (UKSF) signallers have been lost in recent years