This site uses cookies. By continuing to use this site you consent to our use of cookies. more info | ok
british special forces » news » royal navy helicopters are eyes in the sjy for uksf
▼ share this page

Royal Navy Helicopters Are Eyes In The Sky For UKSF

The Telegraph today reports on the contribution to British special forces operations in Afghanistan by Sea King helicopters operated by the Royal Navy.

The newspaper was granted access to information about operations conducted by 854 and 857 Naval Air Squadrons in the skies of Afghanistan. The squadron operates Sea King Mk7 Airborne Surveillance and Control helicopters (SkasaC) - known as 'Baggers' throughout the Navy. The SkasaC is fitted with a sophisitcated radar, designed to scour the ocean for small vessels and able to detect the periscope of a submerged submarine when it breaks the surface. For their missions in Afghanistan, the SkasaC's air crew have used their radar to scan the desert floor, tracking insurgents and smugglers. Data from the radar scans has helped to build up a picture of various off-road transit lines where insurgents move in and out of Pakistan and Iran. The radar can also be used to spot suspicious activity on the ground.

On several occasions, the Royal Navy helicopter crews have guided in UK special forces (UKSF), such as the SAS and SBS, as they moved to intercept targets on the ground. These have included insurgents smuggling drugs and explosives.

SkasaC squadrons have been active in Afghanistan since May 2009. 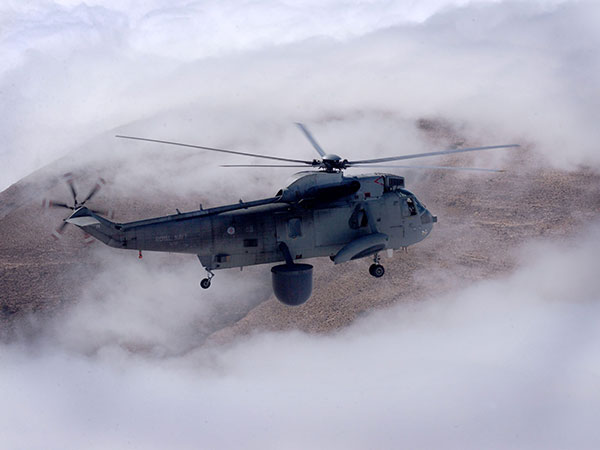 A Sea King Mk7 Airborne Surveillance and Control helicopter. The radar inside the sack on the helicopter's starboard side is a Searchwater 2000. It is a high-power pulse doppler system that can work in a number of modes including, air-to-air,moving target indicator, martime surveillance, ground-mapping and target classification
Image by POA(Phot) Mick Storey ;© UK MOD / Crown Copyright 2022 | used under open government licence