This site uses cookies. By continuing to use this site you consent to our use of cookies. more info | ok
british special forces » news » commando merlins upgrades
▼ share this page

The Merlins will replace the venerable Sea King Mk.4s that the Commando Helicopter Force currently fly in support of the Royal Marines.

25 Merlin HC3/HC3a helicopters will be modified for the commando role. The Merlin Life Sustainment Programme upgrades will include fitting digital glass cockpits and other avionics. The helicopters will also receive a number of modifications required for shipboard operations such as folding main rotor blades, folding tails, strengthened undercarriages and deck lashing points. They will also be fitted with a fast-rope point for Royal Marines operations. The resulting aircraft will be designated as Merlin Mk.4 Commandos. The upgrades will be carried out by AgustaWestland.

The CHF's fleet of Sea King Mk.4s will leave service in 2016. The Merlin Mk.4s will not be available until 2018. An interim batch of 7 Merlins will be delivered to the CHF. With only some of the shipboard modifications performed, namely being fitted with folding main rotor blades and fast-rope facility, these helicopters will be designated as Merlin Mk.3i and will act as a stop gap until the fully modified MK.4s come online. 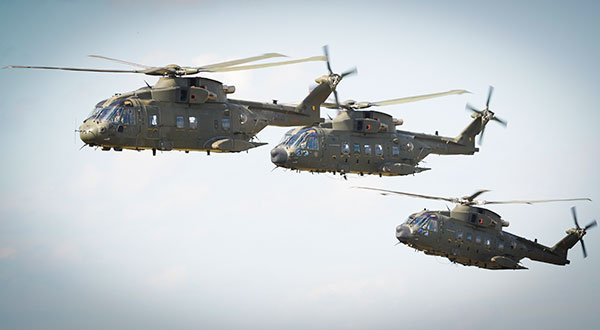 A flight of RAF Merlin HC3 (left) and HC3a helicopters (middle & right). The 'green' Merlins have proved their worth in Afghanistan. It can carry 24 troops or 16 battlefield casualties on stretchers as well as carrying vehicles, field guns and supplies as under-slung loads. Unlike the Royal Navy version, the RAF Merlins do not have a naval search radar dome but do have a rear loading ramp.
MOD photo RAF Benson Photographic Section | © Crown copyright 2013
used under open government licence