This site uses cookies. By continuing to use this site you consent to our use of cookies. more info | ok
british special forces » police special operations » cnc
▼ share this page

The CNC deploys Authorised Firearms Officers (AFO) on a range of security tasks. AFOs in Operational Policing Units (OPU) man fixed point guard stations, carry out foot and vehicle patrols in and around nuclear facilities. They also man armed response teams which are on standby to react to a security breach. CNC dog handlers are used on patrols and to sniff out explosives. Some AFOs are qualified Tactical Care Officers (TCO) and are trained to provide medical aid.

CNC AFOs are typically armed with a Heckler & Koch G36 rifle (both K and C models have been seen in use) and the Glock 17 self-loading pistol. They are also trained in the use of the X25 taser and L104A12 37mm baton launcher.

The Strategic Escort Group (SEG) protects nuclear materials while in transit by road, rail or by sea. Experienced officers are seconded from CNC OPUs from around the country for SEG tasking. They undergo specific training for the role. 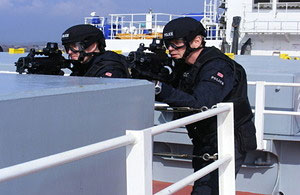 When certain types of nuclear material, such as plutonium, needs to be moved at sea, the SEG Marine Escort Group are tasked with providing security.

Pacific Nuclear Transport Ltd (PNTL), a subsidiary of International Nuclear Services (INS), operate a fleet of 3 ships that carry nuclear materials. 2 of these ships, the Pacific Heron and Pacific Egret, are purpose-built to safely transport MOX fuel and plutonium dioxide from the nuclear fuel reprocessing plant at Sellafield to customers overseas, including in Japan. When they undertake such a journey, the SEG goes with them.

The Pacific Heron and Pacific Egret usually travel together, in mutual escort. Throughout their journey the 2 ships are in continuing contact with authorities and use sophisticated surveillance and monitoring systems to spot potential threats. [1]

For protection, heavily-armed MEG AFOs patrol the ship. Aside from their carbines and pistols, they have access to a selection of weaponry that includes L7A2 GPMGs, M134D Miniguns and HMGs.[2] Each ship is armed with a number of fixed naval guns (type not publicly known - PNTL ships previously used in the role sported 3 x Oerlikon 30mm cannons). Non-lethal measures fitted to the ships include high pressure water hoses which are used to deter and counter sea-bound boarders.

If civil nuclear material needs to be moved by road or rail, the SEG Road Escort Group is deployed to provide armed security. CNC officers seconded to the REG undergo a training package to prepare them for the role. Some receive advanced driving and surveillance training.[3] Road convoys may consist of one or more lorries - which carry the nuclear material - and a number of escorting 4x4s and motorbikes. Vehicles used by the CNC include Mitsubishi Shogun and BMW X5 4x4s.

The CNC has a substantial intelligence section, named Special Branch, that works to uncover and detail threats against the civil nuclear sector.

The CNC does not usually deal with normal criminal activity. Anything outside their remit of detecting, deterring and countering threats against the civil nuclear industry is typically left to local territorial constabularies. There have been occasions, however, when the CNC have been called on to assist colleagues in regular policing matters. In June 2010, for example, a total of 27 CNC AFOs from the Sellafield OPU and Firearms Training Facility were deployed to assist the Cumbria Constabulary in the hunt for gunman, Derek Bird.