This site uses cookies. By continuing to use this site you consent to our use of cookies. more info | ok
british special forces » news » prince harry to support uk special forces
▼ share this page

Prince Harry has qualified as a WAH-64 Apache copilot gunner and may be deployed to Afghanistan later this year, it was reported yesterday. Such a deployment will see the Prince give direct support to British special forces operations, military sources have said.

From Sky News : "'Working alongside Special Forces is a normal part of an operational deployment in Helmand for all Apache crews. They are an integral part of many operations of that sort,' a senior officer told Sky News."

British Apaches have supported numerous ground operations by UK forces in Afghanistan, including those by special forces. They can not only provide close air support to troops in contact on the ground but their sophisticated sensor systems can sweep the battlefield for intelligence. When special forces raid a Taliban commander's compound, for example, the Apache can keep an eye out for 'squirters' - people running from the buildings.

On several occasions, UK special forces have guided Apache gunships to attack high value Taliban personnel. In June 2009, for instance, a British Apache killed Taliban leader, Mullah Mansur, and 2 other insurgents. SBS commandos spotted Mansur and his entourage as they travelled on motorcycles and then called in the Apache who engaged the motorcycle convoy with its 30mm cannon. 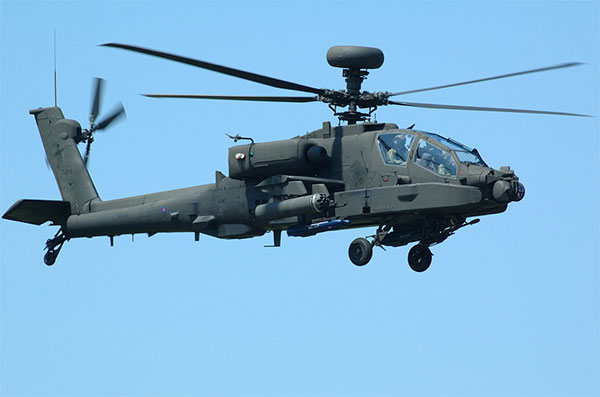 A WAH-64 Apache helicopter. The Apache is a versatile air-to-ground attack platform. As a copilot/gunner, Prince Harry will have access to a range of weapons systems. The Apache can blanket an area with unguided rockets or use its Hellfire missiles for more precise strikes. A fearsome 30mm chain gun is slaved to the gunner's helmet, allowing him to engage any target he looks at.
photo by frielp | used under creative commons licence