This site uses cookies. By continuing to use this site you consent to our use of cookies. more info | ok
british special forces » news » sas snipers
▼ share this page

SAS Snipers In Action In Iraq

An Islamic State (IS) convoy was halted by a lone British Special Air Service (SAS) sniper team operating in Iraq, it has been reported.[1]

According to The Star newspaper, the 2-man SAS team were in a sniper hide on a hillside when they spotted a single truck carrying IS fighters and approaching a small Iraqi village. Fearing that the IS militia were going to attack the villagers, and without air support on hand, the SAS team elected to engage the IS vehicle with their AW50F rifle. A single .50 caliber round was fired into the vehicle's engine, stopping it in its tracks. When a second IS vehicle was called in, it too was neutralised with a shot to the engine. At this point, the IS fighters realized they were under attack and withdrew.

"It was a classic special forces operation. The SAS sniping team didn't want to engage the IS militants in a full-blown battle because they were part of a small patrol spread out over an area. But they knew they could not just let the convoy pass and start killing people in the villages..."

"... So rather than hitting the militants they destroyed their vehicles. It's not always about killing the enemy but neutralising the threat - that's what these guys did."

While this tale appears in a tabloid, and so should be treated a degree of scepticism, it is at least a plausible illustration of what a highly trained special forces sniper team can accomplish with a weapon such as the AW50F.

The weapon is an 'anti-material' rifle, meaning it is capable of neutralising enemy equipment as well as 'soft' targets such as personnel. United Kingdom Special Forces (UKSF) such as the SAS and Special Boat Service (SBS) can use such weapons to take out communications arrays, radars, generators etc - vital equipment that enables the enemy to function properly.

As this news story illustrates, a single round of .50 (12.7 mm x 99mm NATO) caliber High Explosive Incendiary/Armor Piercing Ammunition (HEIAP) shot through an engine block can can effectively remove it from the battlefield. The HEIAP is also effective against lightly-armoured vehicles. Sniping for up to 1.5 kilometers away, a single UKSF sniper, armed with an AW50F, can take out multiple aircraft parked on an airfield.

It is this combination of skill and firepower that enables small special forces teams to have such a strategic impact in a conflict. 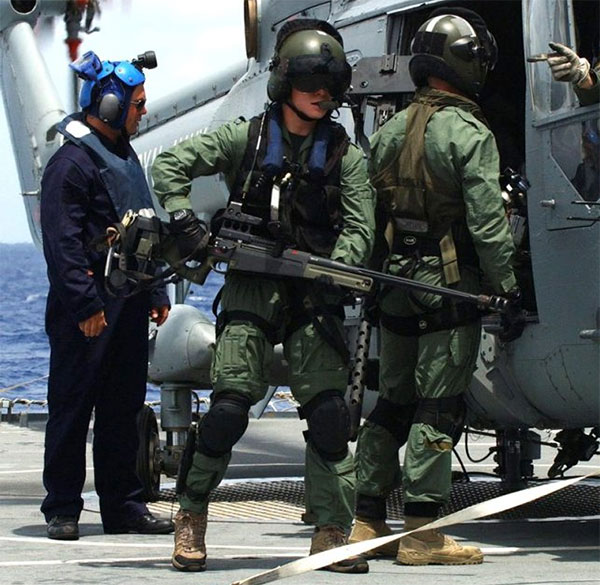 A Royal Marine with a Maritime Sniper Team (MST) pictured holding an AW50 sniper rifle. In the maritime role, the rifle is often fitted with a red dot sight. The MST may use the AW50 to stop small boats with a well-aimed shot through the engine.
Image by LA(Phot) Ray Jones © UK MOD / Crown Copyright 2005