This site uses cookies. By continuing to use this site you consent to our use of cookies. more info | ok
british special forces » news » uksf syria photos
▼ share this page

Photos of British Special Forces In Syria Are Revealed By BBC

Photos of British Special Forces operating in support of Syrian rebels have been published by the BBC.[1]

The BBC report that features the photos claims that British and American special forces have been working alongside a rebel faction known as the New Syrian Army (NSA). It is believed that British Special Forces have been operating from inside Jordan where they train the NSA to take on ISIS. The small UKSF team(s) have on several occasions crossed over the border into Syria to provide direct support to the rebels. Such support may include providing Forward Air Controllers to coordinate air strikes from allied warplanes. 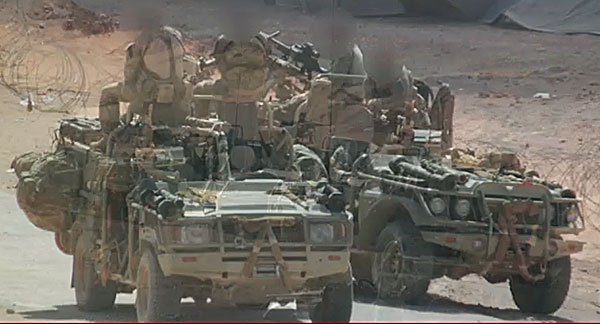 Photo obtained by the BBC shows UKSF vehicles operating in support of Syrian militia. The photo is said to have been taken in June of this year.
Photo source: BBC News

The Al-Thalab is manufactured by Jordan Light Vehicle Manufacturing under license from Jankel Group Ltd. The vehicle features a tubular superstructure attached to a 79 series Land Cruiser chassis. The superstructure supports modular configurations of the payload area, allowing operators to tailor the vehicle to mission requirements. The LRPV is designed to travel up to 1,200km without resupply. Provision for armaments include a swing-mount at the vehicle commander's station for a General Purpose Machine Gun (GPMG) and a ring mount at the rear for a Heavy Machine Gun (HMG) or Grenade Machine Gun (GMG). The Al-Thalab design includes Mounting brackets for secure radios and antennae. 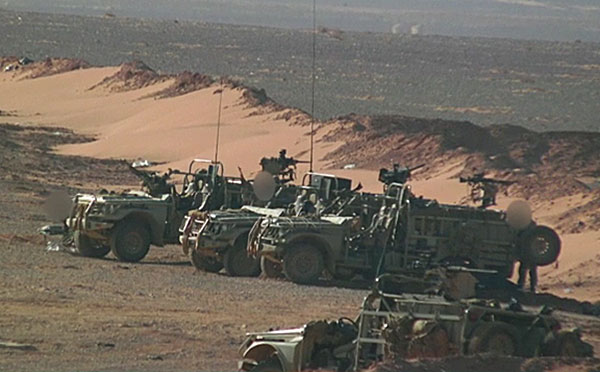 Another photo shows the heavily-armed UKSF LRPV wagons parked up in the desert. Based on the ubiquitous Toyota series 79 Land Cruiser, sourcing parts for the LRPV is easier than some more esoteric military vehicles.
Photo source: BBC News