This site uses cookies. By continuing to use this site you consent to our use of cookies. more info | ok
british special forces » special air service » sas weapons » aw 50f
▼ share this page

The Accuracy International AW50F(L121A1) is very similar in design to the L96A1 and L115A3, and is technically part of the same family of rifles. The .50BMG (12.7mmx9mm NATO) round fired by the AW50 sets it apart, however. Like the L82a1 used by the Royal Marines, the AW50 transcends a mere sniper rifle and becomes an 'anti-material' weapon. The AW50 is more reportedly accurate than the L82a1 at extreme long range.

The AW50F is the model used by British forces. It has a folding-stock and comes in a hard case, along with spare magazines and cleaning accessories. In the field, the AW50 can be packed into a soft-padded case and carried in a sling harness.

When loaded with armor-piercing / incendiary ammunition and in the skilled hands of an SAS trooper, the AW50F can engage a wide range of soft and hard targets. Vehicles can be disabled with a strategically placed shot to the engine, as can parked aircraft and even lightly-armored vehicles. The AW50F is ideal for counter-sniper missions at the .50 round can penetrate through the enemy shooter's cover.

After successful use within 22 Special Air Service, the AW50F has been slowly introduced to other units. The weapon makes for an ideal method of clearing suspected IEDs or mines at stand-off range and has found a use in counter-insurgency situations such as Iraq.

Royal Marines Maritime Sniper teams use the L121A1 in the counter-smuggling role, where its used to shoot and disable the engines on smuggler's speed boats. Royal Marines Recce Troop snipers also use the L121A1 on the battlefield in Afghanistan. It's penetrating power means it can be used to engage targets hiding behind cover. 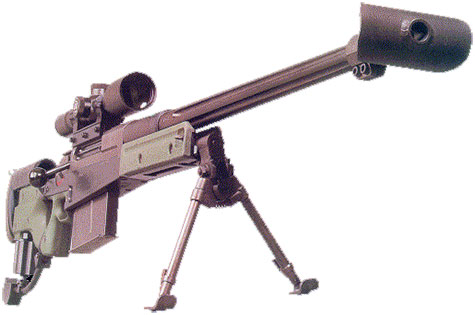 AW-50F with 5-round box magazine fitted. Note the prominent muzzle brake visible at the end of the AW50F. This device reduces recoil, muzzle flash and dust ejection when a round is fired. Some AW50Fs may be fitted with muzzle brakes of different design - see image below for an example. 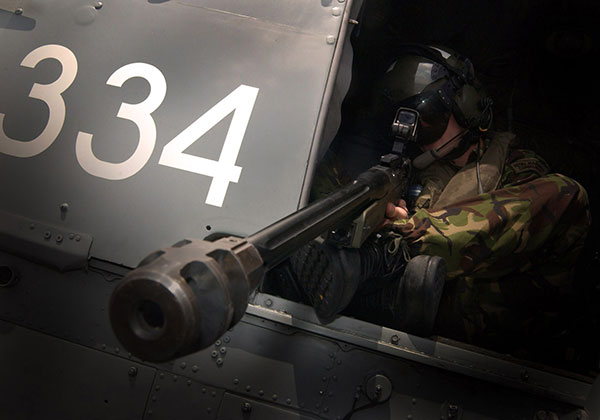 A member of a Royal Marines Maritime Sniper Team takes aim with a L121a1 (AW50F) rifle. When employed in the counter-piracy role, the L121a1 is typically fitted with an EOTech red dot sight rather than a scope. This choice of optics is due to the relatively short engagement distances involved.
Image by LA(Phot) Emma Somerfield © UK MOD / Crown Copyright 2006 | used under open government licence