This site uses cookies. By continuing to use this site you consent to our use of cookies. more info | ok
british special forces » news » crashed special forces lynx
▼ share this page

The Lynx helicopter that crashed in Afghanistan on the 26th Of April, killing all 5 British servicemen onboard, was part of the Army Air Corps' (AAC) elite 657 Squadron.[1]

The Lynx AH9A helicopter came down in Kandahar's Takhta Pul district, some 30 miles from the border with Pakistan. The helicopter was reportedly on a routine training mission and was not brought down by enemy fire, despite Taliban claims to the contrary. Those killed in the incident were Capt Thomas Clarke, WO2 Spencer Faulkner and Cpl James Walters of the Army Air Corps, Flt Lt Rakesh Chauhan of the Royal Air Force and L/Cpl Oliver Thomas of the Intelligence Corps. An official investigation to determine the cause of the fatal crash has began.

657 Squadron has operated Lynx MK7 - and more recently, MK9a helicopters - in support of SAS and SBS operations in Sierra Leone, Iraq and Afghanistan. They provided close air support during Operation Barras, the UKSF operation to free British soldiers from RUF captors in Sierra Leone. In Iraq, 657 Squadron Lynxes carried SAS/SBS snipers and flew over watch for Task Force Black / Task Force Knight ground raids. Similar support has been provided for the UKSF campaign against Al Qaeda and the Taliban in Afghanistan. One example of the squadron's role can be found in a September 2007 mission in Farah Province, in which it flew Special Boat Service (SBS) commandos into action on a daring hostage rescue mission. [2] 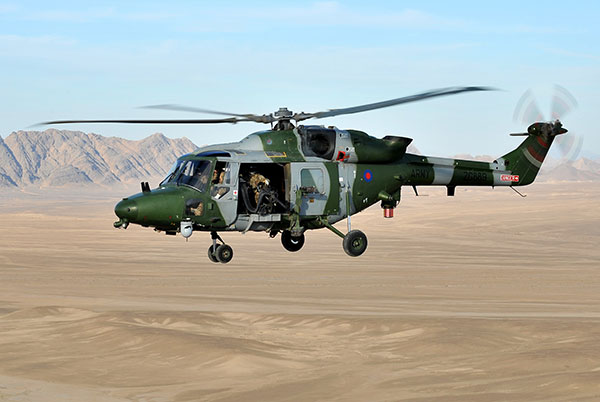 An Army Air Corps Lynx AH9A helicopter in flight over Helmand Province, Afghanistan. The helicopter is typically crewed by three - pilot, co-pilot and gunner. The gunner in this photo is manning a M3M .50 calibre heavy machine gun. Note also the WESCAM MX-10 electro-optical / infrared (EO/IR) imaging system housed in a pod mounted forward, the port side of the helicopter;s fuselage. This system allows the MK9a to operate as a flying surveillance platform for special forces operations on the ground. A night-vision-compatible cockpit enables the Mk9a to carry out covert night time operations. The aircraft can be used to insert and extract special forces and can carry up to 9 troops in its cabin.
Image by Sgt Steve Blake RLC © UK MOD / Crown Copyright 2012 | used under open government licence