This site uses cookies. By continuing to use this site you consent to our use of cookies. more info | ok
british special forces » news » sas hit taliban
▼ share this page

The Special Air Service (SAS) has ambushed the Taliban in a daring night-time operation in the Afghan, desert, early last Thrusday morning, it has been revealed.[1].

The Taliban had crossed into Helmand Province from neighboring Nimruz in order to attack a base manned by Afghan government forces. The Taliban was returning home after the attack in a convoy of 4x4 vehicles when it was spotted by a U.S. unmanned aircraft. The remotely-piloted drone fired missiles at the convoy, destroying a number of vehicles and causing the Taliban fighters to flee into the desert.

An SAS team were flown into the desert in order prevent the Taliban's escape. An ambush was put in across the Taliban's line of retreat. The Taliban were given the opportunity to surrender which they refused. An intense and prolonged fire fight then broke out, which, as the the battle raged on, developed into close quarters fighting. Up to 30 Taliban were reportedly killed in the engagement, with no British casualties recorded.

This skirmish is one of the most successful special forces operations in recent years. It would appear that the Taliban, are trying to regain a foothold in Helmand ahead of the planned withdrawal of British forces from the province in 2014. Some speculate that some British and U.S. special operations forces may remain in Afghanistan after the main pull out of regular forces has taken place. 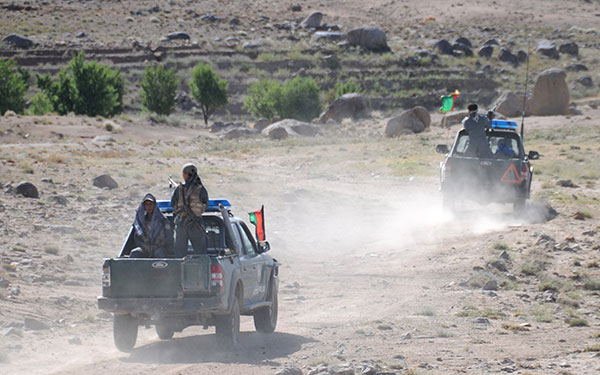 The Taliban fighters were travelling in a convoy of 4x4 pickup trucks when they were spotted and attacked by unmanned drones. Such vehicles are common in Afghanistan and have been adopted for military use by the Taliban, Afghan government forces (Afghan Police shown above) and by western special operations forces, including U.S. Army Special Forces. Models used include Toyota Tacoma, Toyota Hilux and the Ford Ranger. In addition to troop transport, Taliban 4x4s may be used as weapons platforms. When used in this role such vehicles are known as 'technicals' and may sport a range of weapons including heavy machine guns, anti-aircraft guns and rocket launchers.
photo by wikipedia user U.S. Army photo by Spc. Eric Cabral/Released