This site uses cookies. By continuing to use this site you consent to our use of cookies. more info | ok
british special forces » gear » misc kit » diving gear
▼ share this page

The Special Boat Service and SAS Boat Troops use some specialized gear when working underwater. Detailed here are some of the gear used by UKSF frogmen.

Unlike wet suits that allow some water inside the suit, dry suits completly insulate and protect the wearer. They are typically made of a tight-fitting synthetic material such as neoprene and are sealed at points like the wrists, ankles and neck. Dry suits can be inflated, allowing the wearer to adjust their bouyancy.

Dry suits are worn by divers with the SBS, SAS Boat Troops and Fleet Diving Units. Royal Marines units including Special Forces Boat Operators, RIB coxwains and boarding teams may also wear dry suits. Many of the dry suits used by the British military are made by Northern Diver or Typhoon. 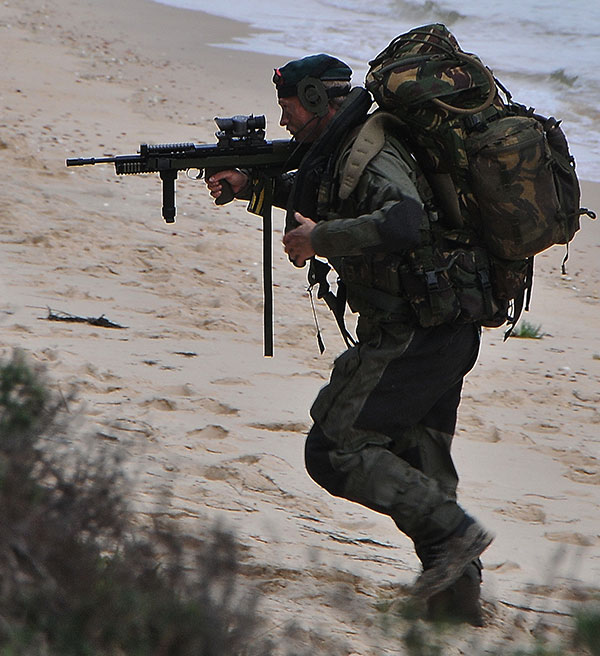 A Royal Marines Commando pictured during a beach reconnaissance operation. He is wearing a Typhoon Gore-Tex immersion suit. The suit is designed for cold water surface operations and is used by the SBS and Royal Marines units such as 539 ASRM. It features a layer of flame-retardant Nomex over a Gore-Tex membrane. The neck and cuffs are neoprene. The suit has Kevlar reinforced elbows, knees and seat and come in black or green colours.
NATO photo by Horta Pereira | Used under CC Attribution-ShareAlike 2.0 Generic

Traditional open-circuit SCUBA gear is both bulky and heavy. Furthermore, SCUBA tends to leak large quantities of bubbles to the surface, revealing the presence of the diver.

Rebreathers are closed-circuit systems which recycle the diver's breath after filtering out and storing the carbon dioxide, adding extra oxygen as needed. This design makes for smaller, lighter breathing sets that leave no telltale bubble-trails. For these reasons, rebreathers are the preferred breathing apparatus for Special Forces.

Rebreathers that run on pure oxygen can be used down to 70 feet. More sophisticated rebreathers use an oxygen-nitrox mix and allow for deeper diving levels. UKSF divers use rebreathers on a wide range of tasks, such as:

UKSF have used the Dräger LAR V design of rebreather. The Dräger rebreather LAR-V Mod 2 attaches to the wearer's chest. Newer models go over the back like traditional SCUBA gear. The Dräger is a 100% oxygen system that can be used in shallow diving operations. 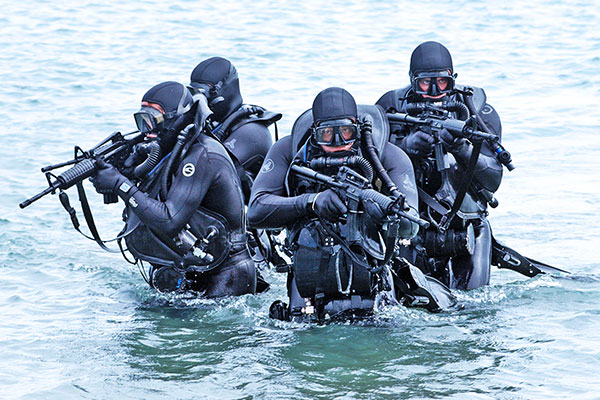 UKSF also use the Divex Shadow series of rebreather (possibly replacing the Dräger).

The Shadow rebreather, which is a 100% oxygen system, has a duration of up to 6 hours and is designed for use in shallow waters. The Shadow is compatible with the Divex Digicom 3000m Diver Through Water Communications system and Divex Stealth Full Face Dual Mode Mask.

A more advanced model, the Shadow Excursion, can be used at deeper depths as it uses an oxygen/nitrox mix. The Full Face mask that comes with the Shadow can quickly interface with on-board air supplies found on SDVs. The standard Shadow can be field-upgraded to Shadow Excursion spec in short order.

Swimboards are hand-held units that contain an illuminated compass for underwater navigation. Additonal equipment such as depth guages, timers and divers watches can be attached to the board. Although not confirmed, it is likely that UKSF use swimboards manufactured by British firm, Divex. 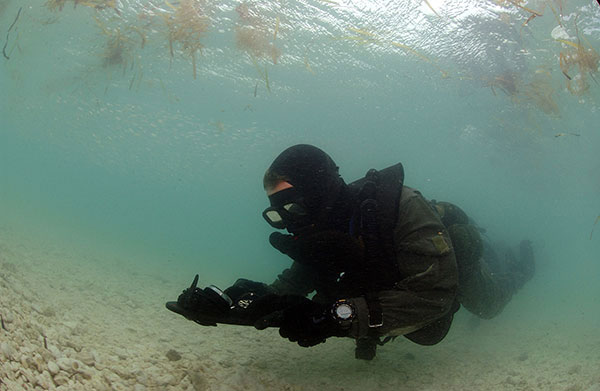 Divers tasked with carrying out underwater beach surveys (SBS, Fleet Diving Unit 2) may employ the BAE Systems' DEBRA (Divers Electronic Beach Reconnaissance Aid) which features a swim board fitted with an electronic compass, GPS, doppler velocity log and other sensors that allow for an automatic survey of beach depth over a predefinfed grid to be collected.