This site uses cookies. By continuing to use this site you consent to our use of cookies. more info | ok
british special forces » gear » vehicles » snowmobiles
▼ share this page

The SAS, SBS and the Royal Marines all employ a variety of over-snow vehicles (OSV) when operating in arctic conditions. Snowmobiles are typically powered by caterpillar tracks at the rear, with a set of skis up front which are steered by a handlebar mechanism. Snowmobiles run on petrol, as apposed to diesel, which would freeze at arctic temperatures.

UK elite and special forces, whilst currently focused on warmer environments, still need to be kept up to speed on operating in the snow. During the cold war, the SAS, SBS and Royal Marines were tasked with protecting NATO's northern flank through the defence of Norway. Snowmobiles give these units the ability to maneuver in conditions in which conventional vehicles and aircraft cannot operate. Aside from the men and supplies carried on the vehicles themselves, snowmobiles can pull skiers and trailers behind them. These trailers can hold supplies and can be used to casevac the wounded. 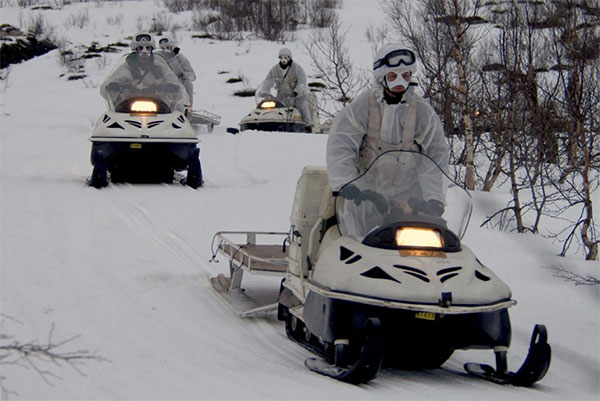