This site uses cookies. By continuing to use this site you consent to our use of cookies. more info | ok
british special forces » weapons » minimI
▼ share this page

The Minimi is a 5.56x45mm light machine gun manufactured by FN Herstal of Belgium.

They are comparatively lightweight weapons, designed to be employed by dismounted infantry squads and fired from a standing, kneeling or prone position. They feature a folding bipod to provide stability when firing while prone. The weapon has a mounting lug for use with tripods and vehicles although the minimi is rarely used this way by UK forces.

Minimis fire a disintegrating belt of 5.56x45mm fed from a 200-round box, 100-round box or 100-round soft pouch. Standard Nato 30-round magazines can also be fitted, although this is seen as an option of last resort.

The 5.56x45mm round lacks the punch of the 7.62x51mm round of the GPMG, but both the Minimi and its ammunition are lighter and more convenient to carry.

The Minimi, in its full-size version, (L108A1) was first used within the British military by the Special Forces. The Minimi, with its high rate of fire combined with the amount of ammo one man could carry, made it ideal for Special Forces operations. The Bravo Two Zero SAS patrol, for example, took several Minimis with them into Iraq during the 1st Gulf War.

The L108A1 features a 18.3 inch barrel and a skeletal fixed metal stock with a fold-up shoulder strap.

The (L110A1 & L110A2) Light Machine Gun (LMG) is the MoD designation for the the Minimi PARA, a variant designed with airborne forces in mind. The PARA has a collapsible stock and 13.7 inch barrel. The LMG has now replaced the GPMG in most British infantry sections / fire teams. A typical infantry section features 2 LMG gunners, 1 in each 4-man fire team. 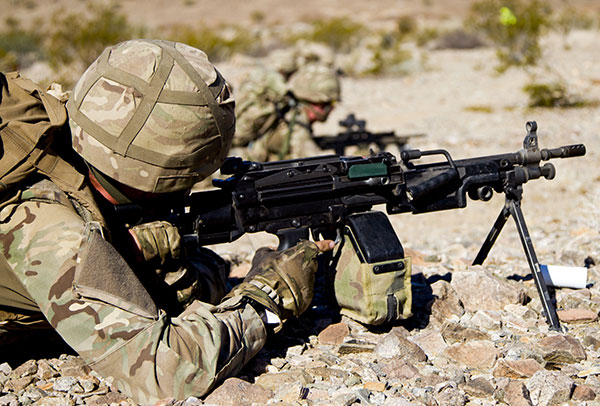 The L110A2 is a development of the A1. The minimi mk 2 features a rail on the feed cover for mounting scopes such as the SUSAT, Lightweight Day Sight (LDS) and Common Weapons Sight (CWS) night vision scope. Another set of rails on each side of and under the forearm allows for laser aiming devices such as the LLM 3, lights or foregrips to be attached. 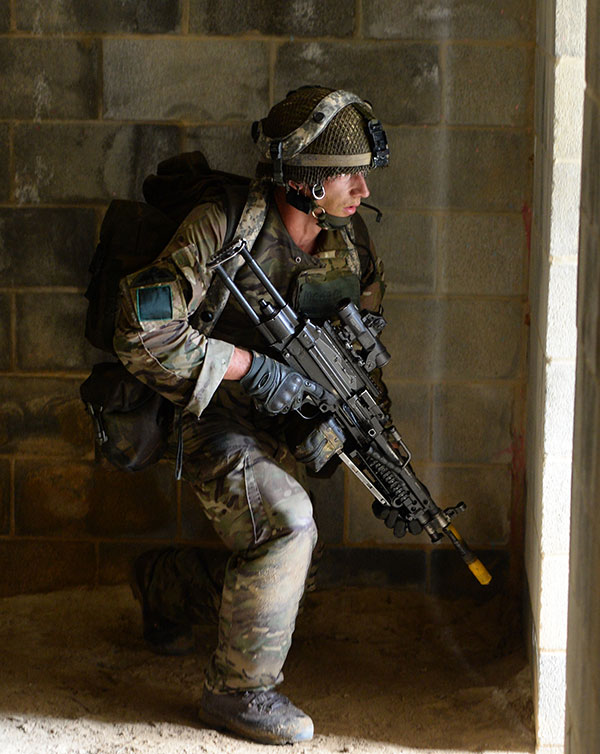 A further variant, the L110A3 features an adjustable Savit buttstock as well as top and side rails.

It is thought that SAS, SBS and SFSG have access to a variant of the minimi, known as the 'maximi', which is chambered for 7.62x51mm NATO.

The maximi features a 19.8 inch barrel, adjustable stock and triple-rail handguard. The 7.62x51mm cartridge and longer barrel pushes the effective range out to 1000 meters. The tradeoff for the increase in range and firepower is a heavier gun (and ammo) and a slower rate of fire than the 5.56x45mm models.

In late 2011 a small number of 7.62x51mm LMGs were bought from FN Herstal by the MoD as an urgent operational requirement (UOR) and deployed to the front line in Afghanistan.