This site uses cookies. By continuing to use this site you consent to our use of cookies. more info | ok
british special forces » close protection
▼ share this page

The specialized role of close protection (cp) is carried out by a number of UK military and Police forces.

The Counter Revolutionary War (CRW) wing of 22 SAS developed its close protection role in the late 60s/early 70s, as part of its emerging counter terrorist remit. The SAS have guarded high-ranking British politicians, including Prime Ministers, members of the Royal Family and foreign VIPs. In 1970 they protected Sultan Qaboos of Oman when his father was deposed. Many of the other units described in this section have, at some stage in their development, received advice and training from SAS instructors. Both 22 SAS, and the two reserves regiments, 21 and 23 SAS, are trained in close protection.

SBS Marines have been known to have provided bodyguards for high-ranking military personnel. An example of this, described in Damien Lewis' book, Bloody Heroes

, is when an SBS team provided security for a US General who was visited Mazar Sharif, a city in Northern Afghanistan in 2001. A UPI story from 2002 indicates that the SBS were, for a period of time, responsible for protecting Afghanistan's Interim Administration Chairman Hamid Karzai, who would later become President.
Quote : "Lacking any adequately trained national security service, Karzai relies on the British Royal Marines counter-terrorist unit, the so-called Special Boat Service, for his personal protection. The SBS team, which stays close to Karzai around the clock, arrived in Kabul at the time of the interim government's swearing in ceremony last December." 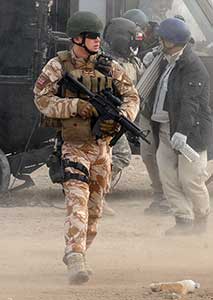 RM Police Troop bodyguards are Royal Marines Commandos who have undergone close protection training by RMP instructors. In addition to standard UK military weapons, RMP Troop use carbines such as C8 CQBs when on CP duties.

A branch of the London Metropolitan Police, the RDPD comprises of:

A unit of the Ministry of Defence Police (MDP) which carried out a range of duties including VIP protection.