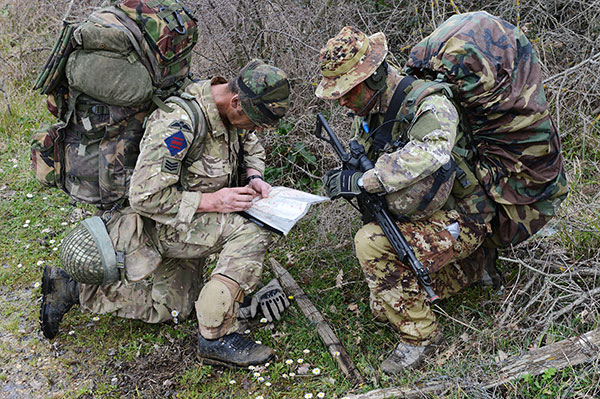 <<<8 of 44>>>^ gallery+ enlarge
A Reconnaissance Sergeant with 23 Engineer Regiment (Air Assault) consults a map with an italian soldier with the Brigata Paracadutisti Folgore during an Anglo-Italian surveillance, target acquisition, and reconnaissance (ISTAR) exercise, March 2013.

Reconnaissance specialists from 23 Engineer Regiment, such as 9 PARA Squadron Recce Troop, deploy as part of the Pathfinder Group, 16 AA BDe's recce formation, led by the Pathfinder Platoon. Working ahead of the main force, they carry out engineering reconnaissaince operations, which may include assessing the passability of roads and bridges, the nature of any water obstacles, and identifying targets for demolition.