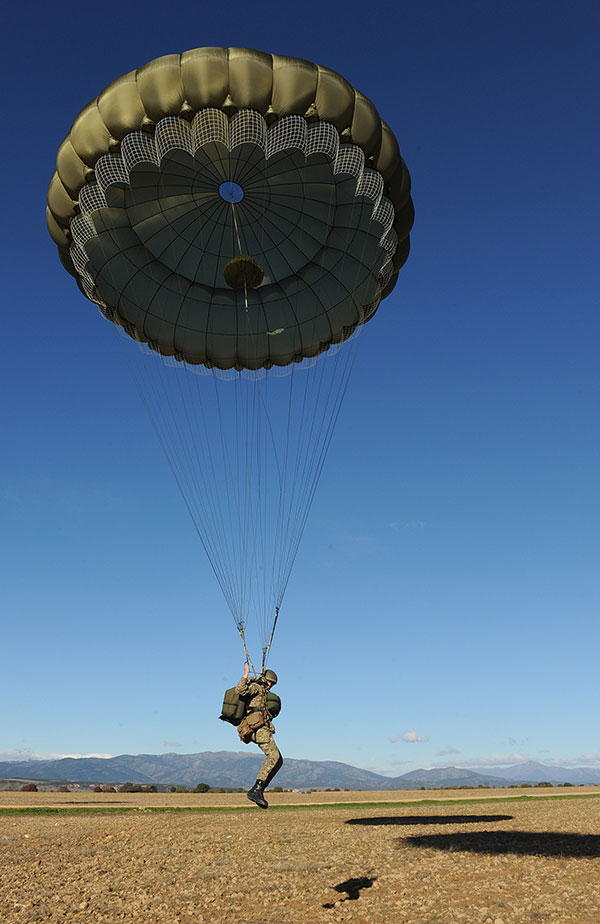 <<<8 of 37>>>^ gallery+ enlarge
A Paratrooper from3 PARA prepares to land at a Spanish drop zone (DZ) during Exercise Iberian Eagle, 2012. The parachute is the Irvin-GQ LLP Mk 1, which is the standard British military Low Level Parachute (LLP), . The LLP is used for static line parachute drops, including mass tactical drops of paratroopers, down to a level of 250 feet.

The chute can handle a maximum suspended load of 160kg. Depending on suspended weight, the LLP chute decends between 5 and 6 meters per second. The LLP assembly itself weights 16.5 kg. The LLP is typically augmented by the Irvin-GQ LLRP, a chest-mounted reserve chute, to be deployed if the main chute fails.

Ulike more advanced parachutes employed by specialist units, such as the BT80 gliding parachute or GQ360 Static Line Low Level Parachute, the LLP is not steerable enough to be used for precision landing operations.