This site uses cookies. By continuing to use this site you consent to our use of cookies. more info | ok
british special forces » parachute regiment
▼ share this page

The Parachute Regiment, or 'The Paras', was formed during World War 2. Designed as shock troops, Paras were dropped behind German front lines to capture key positions then hold them until the rest of the invasion force could link up with them. The modern day Parachute Regiment provides infantry to Britain's air mobile rapid deployment force, 16 Air Assault Brigade and specialised infantry support to British special forces. 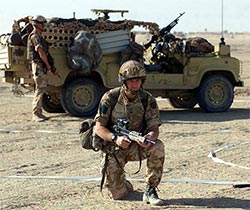 Those wishing to join the Paras must pass a series of initial British Army tests, followed by PARA-specific selection and training.

The Parachute Regiment is formed from 3 regular battalions and 1 reserve.

1 PARA is assigned to the Special Forces Support Group and come under the control of the UKSF directorate. 2 & 3 PARA provide troops for 16 Air Assault Brigade. 4 PARA are a territorial unit who provide reserves integrated into 2 and 3 PARA.

related book:
3 PARA
A gripping account of 3 PARA battle group's experiences in Helmand Province in 2006 features many great stories of the Pathfinders, Paras and Gurkhas in various skirmishes with the Taliban

A superb set of tales of courage under fire

1, 2 and 3 PARA's order of battle (ORBAT) are slightly different to each other.

*note: 2 and 3 PARA ORBATs are currently undergoing restructing as part of the ARMY 2020 program.

Paratroopers from each Parachute Regiment batallion wear colour-coded flashes below their PARA Wings on their right arms to identify them.

The Paras' intensive training and regimental culture instills in them a fierce sense of confidence and aggression - qualities essential for airborne shock troops. The PARA's regimental motto is “’Utrinque Paratus’ (‘Ready for Anything’). Their ethos, training and experience makes a PARA an ideal candidate for joining the Special Air Service. It's been reported that the SAS is now made up of close to 60% ex-Paras.

The Paras have been at the forefront of many British actions in World War 2 and onwards. The Parachute Regiment further distinguished itself during the 1982 Falklands conflict, where they fought and won several key battles. Members of 3 PARA were recently (2006) deployed to Helmand Province, Afghanistan where they fought almost daily battles with Taliban forces. Paras in the SFSG provide continuing support to SAS and SBS operations in Iraq and Afghanistan.

Some notable Parachute Regiment operations include:

The Parachute Regiment is designed as a self-sufficient assault force. Everything needed for an operation is air-dropped / lifted into action with the men.

Along with artillery units and mortars, the Paras bring along heavily armed WMIK (Weapon Mount Installation Kit) Land Rovers. WMIKs can be fitted with a range of weaponry including GPMGs, .50 cal HMGs, Milan anti-tank missiles launchers and anti-aircraft (SAM) missiles. Milan Anti-Tank missiles are not only effective against armour but are devastating when used against bunkers and dug-in positions. The combination of transportability, mobility and firepower are perfect for the Parachute Regiment who like to get in quick and hit hard.

These 6x6 versatile all-terrain vehicles are used as troop carriers by the Paras.

The Pathfinder Platoon is a special reconnaissance force made up of (mostly) Paras integrated into 16 Air Assault Brigade.