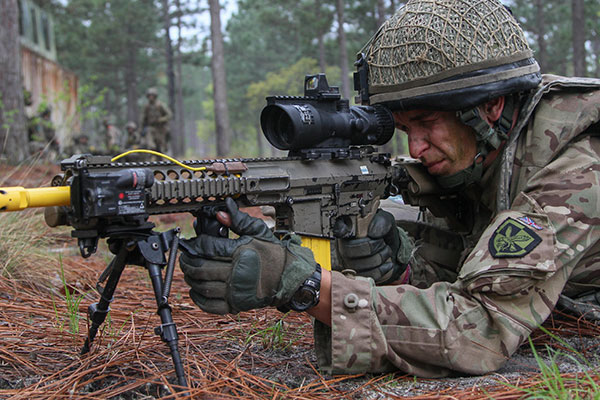 A Paratrooper with the 3rd Battalion, the Parachute Regiment) (3 PARA) looks through the ACOG 6x48 scope mounted atop a L129A1 Sharpshooter rifle. Note: the yellow barrel and magazine denote the weapon has been modified to fire blank ammunition.

The L129a1 was brought in under an urgent operational requirement (UOR) during Operation Herrick. Soldiers in Afghanistan needed a way to accurately engage the Taliban at ranges out to 800 meters. Platoons deployed to the frontline in Helmand had equipped sharpshooters with a l96a1 7.62mm x 51mm rifle (the sniper platoons had upgraded from the L986 to the LL115a1/a3).

The L129a1 was brought in to solve some issues with the bolt-action L96a1 when it was used in the sharpshooter role. L129a1 is semi-automatic, which means a skilled operator can fire rapid follow-on shots, hence providing greater suppressive fire. It also has a main scope designed for long range engagements and an additional mini reflex sight for close in fighting. All in all, the L129a1 is a much more suitable weapon for a patrolling infantryman than the L96A1.

The L129a1 has also become popular with the spotter element of a 2-man sniper/spotter team, with some electing to carry it instead of a SA80a2.