This site uses cookies. By continuing to use this site you consent to our use of cookies. more info | ok
british special forces » news » special forces rescue aid workers - details emerge
▼ share this page

Some details regarding the recent rescue of 4 kidnapped aid workers by an international special forces team in Afghanistan are beginning to be reported.

Background - On May 22nd, British aid worker, Helen Johnston, Kenyan medic Moragwa Oirere and 2 Afghan colleagues were kidnapped while travelling on horseback in flood-hit Badakhshan province, in north-eastern Afghanistan. Their kidnappers were believed to be a criminal gang associated with the Taliban. A ransom was demanded but the Afghan goverment refused to negotiat. NATO, in the form of ISAF, went to work on trying to locate the 4 hostages, which they eventually succeeding in doing so. It was eventually determined that the hostages were being held within the Koh-e-Laram Forest in the Shahri Buzurg district of Badakhshan province.

The location of the aid workers had been ascertained through various intelligence means, including signals intercepts and surveillance by Predator drones. As the situation continued to be monitored, intelligence indicated that the hostages may be harmed as a 'show of intent' in an attempt to force the Afghan government to negotiate. There were also fears that the hostages were likely to soon be handed over to more extreme groups, a common occurrence in such kidnappings. Fears that the hostages would be moved or harmed resulted in the decision to launch the rescue operation, which apparently fell to UK Prime Minister, David Cameron to authorise.

Reports say that the rescue force consisted of British, U.S. and Afghan special operations forces assigned to ISAF's Joint Special Forces Group. Most reports say that the British contingent were from the Special Air Service (22 SAS), although some say they were from the Special Boat Service (SBS). Both units are believed to be active in the country. The American contingent were reportedly from DEVGRU, otherwise known as SEAL Team Six, the 'Tier One' Naval Special Warfare unit that killed Osama Bin Laden. A number of Afghan special forces 'Tiger Teams' were also involved.

It was believed that the hostages had been split into 2 groups, one held in a collection of mud huts and the other in a cave complex several miles away. For the assault, the group would split into 2 teams: the UKSF element would go for the hostages in the huts while the SEALs would hit the caves. Afghan commandos would provide security cordons around the operations.

The operation was launched from a forward operating base that had been established in the area. In order to keep the element of surprise, the rescue forces were inserted several miles from where the hostages were being held.

The teams were flown to a location on the edge of the Koh-e-Laram Forest by MH-60 Black Hawk helicopters operated by the 160th Special Operations Aviation Regiment, a U.S. Army unit. Some reports indicate that decoy helicopter insertions were also carried out to fool any lookouts on the ground. Once inserted, the 2 rescue forces then made their way on foot, under cover of darkness, through the rough terrain until they reached their respective assault positions.

When the UKSF team reached their objective they engaged in a fire fight with a number of heavily armed enemy. The SEALs stormed the caves and reported back that they had found no hostages, causing the higher ups a moment of concern, which was soon allayed when the UKSF assault team reported that all 4 of the aid workers had been found unharmed in the huts. At least 5 kidnappers / Taliban had been killed during the raid.

The mission on the ground complete, the assault force and the 4 freed hostages were whisked away by helicopters. The hostages were delivered to the British Embassy in Kabul, for eventual return to their families.

While this operation appears to have gone off without a hitch, such rescues attempts are inherently risky. Earlier this year a joint British-Nigerian operation in Sokoto, Nigeria, failed to rescue 2 hostages, 1 British and 1 Italian, before they were killed by their captors. A mission in 2010 in Afghanistan ended in tragedy when kidnapped British aid worker Linda Norgrove was killed by a grenade thrown by a member of the SEAL Team 6 unit that was trying to rescue her. 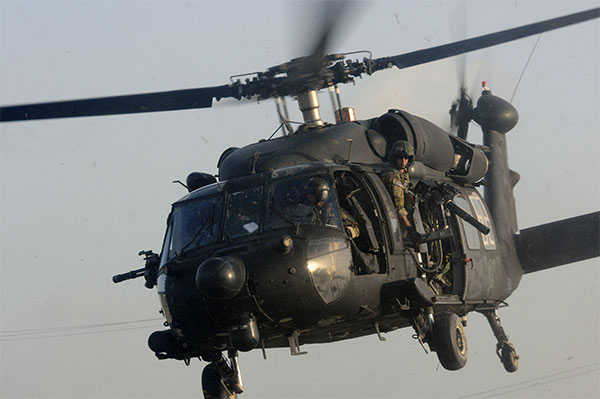 The joint special ops task force was flown into action by MH-60 Black Hawks like the one pictured above. These are modified UH-60s modified for special ops use with multi-mode radars, infrared sensors and advanced defensive counter-measures. They are typically armed with 2 7.62mm miniguns. The MH-60 is operated by the 160th SOAR, or the 'Night Stalkers', a U.S. Army unit that specialises in supporting special operations.
U.S. DoD photo by Sgt. Joseph Tolliver | Public Domain