This site uses cookies. By continuing to use this site you consent to our use of cookies. more info | ok
british special forces » news » royal marines to get viking upgrades
▼ share this page

Royal Marines To Get Viking Upgrades

Plans to upgrade a number of the Royal Marines' BvS 10 Viking APCs have been announced. 99 of the vehicles will be modified to Mk2 standard with a cost of £38 million. These improvements, to be carried out by BAE Systems, include:

The Royal Marines already have a small number of Mk2 Vikings. The upgrade program will bring the entire 120-strong fleet of Vikings up to Mk2 standard and is expected to be completed by December 2014. 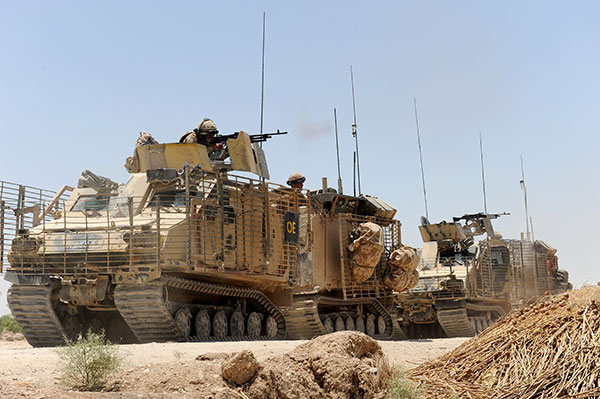 BvS 10 Vikings, these with the Royal Tank Regiment (RTR), engage enemy positions during an operation in Afghanistan. The Viking is typically armed with a 7.62mm GPMG or 12.7mm HMG. They are also fitted with multiple smoke grenade launchers. The Warthog APC has replaced the Viking in the Afghanistan theater.
Image by POA(PHOT) Gaz Armes | © UK MOD / Crown Copyright 2022 | used under open government licence