The BBC and other news sources are reporting that 'British special forces' have stormed an Italian-owned merchant vessel, MV Montecristo. The ship had been hijacked some 620 miles off the Somali coast by a pirates on Monday. It was carrying a 23-man crew. 11 pirates were said to have been captured in the subsequent rescue operation by British forces.

The news of the operation was broken by Italian defence minstry sources. It later emerged that the British unit involved in the rescue was a mixed Royal Navy / Royal Marines boarding party, likely to include specialists from the Fleet Protection Group, who are operating in the area as part of a multi-national counter piracy task force. A Royal Fleet Auxillary vessel, RFA Fort Victoria, along with a US Navy Frigate,were involved in the operation. As the 2 naval vessels approached the MV Montecristo, the pirates wisely surrendered. Under top cover provided by a Royal Navy Lynx helicopter, a Royal Marines boarding party from RFA Fort Victoria boarded the Montecristo, captured all 11 pirates and freed the crew who had been sheltering in a specially-constructed, impenetrable panic room inside the ship. 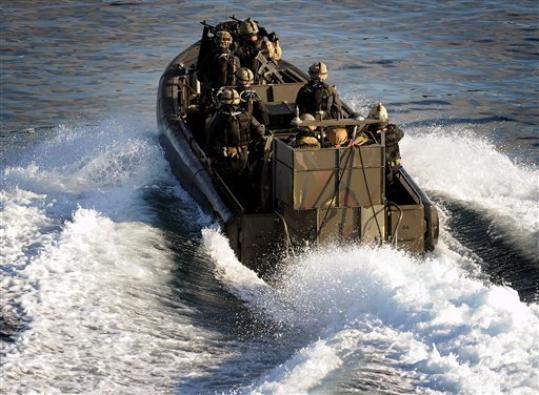