This site uses cookies. By continuing to use this site you consent to our use of cookies. more info | ok
british special forces » gear » boats » offshore raiding craft
▼ share this page

The Offshore Raiding Craft (ORC) is a relatively new addition to the Royal Marines' inventory. The ORC is designed for commando insertion/extraction, patrol, maritime interdiction and fire support missions.

Users of the ORC include 539 Assault Squadron Royal Marines and 43 Commando.

The 9 meter-long ORC has an aluminium hull with a low enough draft to allow for safe, rapid beach insertions. 2 crew and up to 8 fully-equipped Royal Marines can be carried on a set of upright seats.

The ORC comes in a number of variants:

The Aft Console Variant (ACV) is the troop carrying version. With the crew console situated at the aft, the ACV can carry up to 8 troops on saddle seats. The boat is armed with a forward-mounted HMG or single/twin GPMG. Optional amour-panels can be fitted to provide ballistic protection for the 2 crew and passengers.

The Mid Console Variant (MCV) is a dedicated fire support version. The MCV is fitted with Dynema armour-plating which protects against small arms fire up to 7.62mm ball. The steering console is situated near the middle of its length to create room for port and starboard aft gun stations. Weapon mounts are: (1x HMG / GPMG fwd, 2 x GPMG/HMG/GMG/Minigun aft). Up to 4 troops can also be carried on seating ahead of the console. 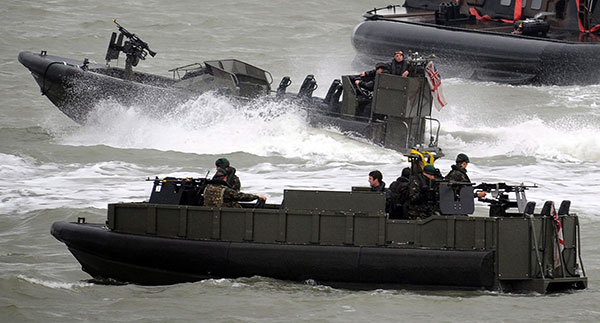 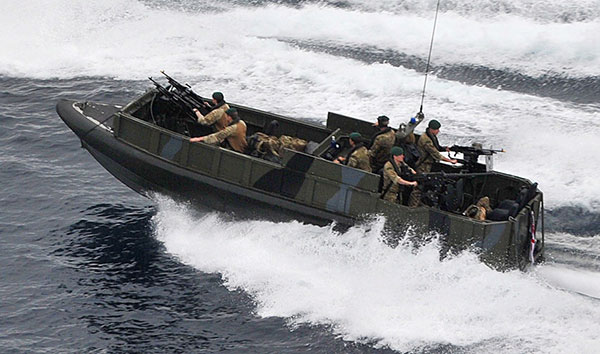 The ORC can be air-transported inside C130 Hercules transport planes or carried as an under-slung load by Chinook and Merlin helicopters.

Around 39 ORCs are in service with the Royal Marines.

The ORC is manufactured by Holyhead Marine of Anglesey, North Wales. 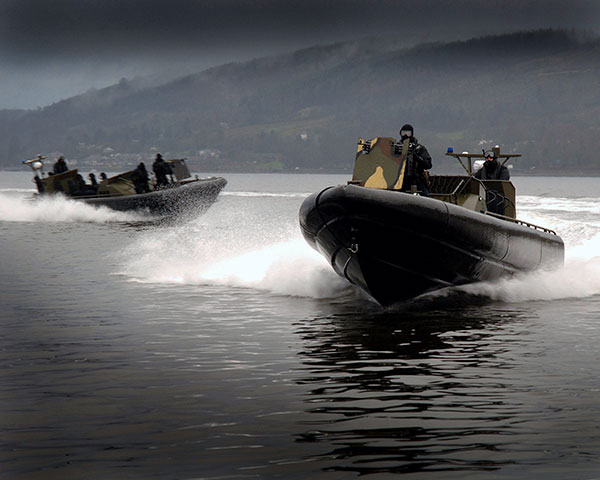 Offshore Raiding Craft (ACV) operated by 43 Commando Fleet Protection Group. 43 Commando use the ORC to escort nuclear submarines as they travel to and from their base at HMNB Clyde in Scotland. Note the twin GPMGs mounted on the bow, with ballistic shielding protecting the gunner.
Image by LA(Phot) Dave Jenkins | © UK MOD / Crown Copyright 2008
Used under Open Government Licence