This site uses cookies. By continuing to use this site you consent to our use of cookies. more info | ok
british special forces » news » sas sniper takes out isis executioner
▼ share this page

This story has been doing the rounds of the tabloids over the last couple of days. The Daily Star claims that a British SAS sniper took out an ISIS commander while he was teaching of Jihadis how to decapitate prisoners. [1]

According to the Star, the sniper used a special 'wounding bullet' that 'tumbles' when it hits the target. The effect of this round hitting the ISIS terrorist's head was to, in the words of Dirty Harry, 'blow it clean off.' The poetic justice of an ISIS executioner known to behead his victims losing his own head is clear.

The SAS sniper was reportedly positioned some 1,200 meters away from the target, having infiltrated deep into ISIS territory. MI5 operatives had pinpointed the location of the ISIS training camp. The camp's proximity to a school meant that an airstrike would risk collateral casualties so the SAS were called in to take out the ISIS commanders. The Star reports that 2 4-man SAS teams went in, with a further group laying back as a quick reaction force in case anything went wrong.

The sniper teams lay in wait for over 12 hours until their target appeared in the camp grounds. As the ISIS leader performed his gruesome lesson, one of the SAS snipers took him out. The students in the ISIS class proceeded to panic and flee for cover. The SAS team quietly infiltrated out of the area.

As with many press reports on the SAS - especially ones emanating from tabloids such as the Daily Star - one has to treat this tale with a healthy degree of scepticism. You have to wonder how the Daily Star got this story and why anyone involved in a mission such as this would be sharing such operational details. Given the too-good-to-be-true nature of the story, one may be inclined to assume that this is merely a fairy tale dreamt up to sell papers. This happens frequently, without fear of official refutation, as the Ministry of Defence has a well-known policy of never commenting publicly on special forces matters.

However true the story, an interesting detail was that it reports that the SAS sniper used a DAN .338 rifle one fitted with a sound suppressor / flash hider. In a 2014 story, the paper reported that both the SAS and SBS were considering adoption of this Israeli-made sniper rifle.[2] The paper reported that the DAN .338 is lighter and easier to use than the L115A3 .338 rifles that the SAS/SBS were using. The weight claim is dubious as the DAN 338 is actually .1kg heavier at 6.9kg (without scope, mount and magazine) when compared to the 6.8kg of the L115A3. It may be true, however, that the DAN has better ergonomics, although both weapons have the same overall length. The Star report also claims that the DAN is more accurate and its scope is less prone to being affected by knocks. One clear advantage the DAN has is in the magazine, holding 10 rounds as opposed to the L115A3's 5. 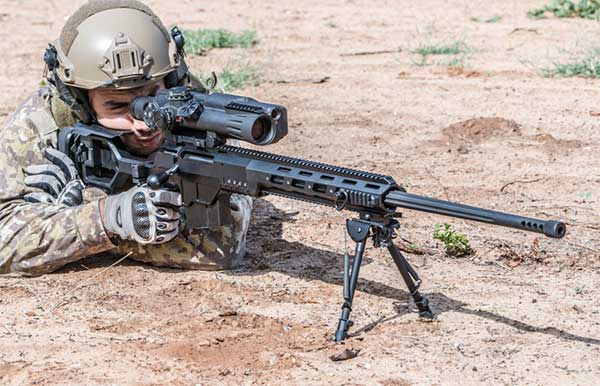 The DAN .338 sniper rifle. Made by Israel Weapon Industries (IWI), the weapon is chambered for the powerful .338 Lapua Magnum cartridge. It features a folding stock and lightweight aluminium alloy chassis. A long Picattiny rail runs along atop the receiver and forearm for mounting scopes and further set of forearm rails in the 3, 6 and 9 o'clock positions facilitate the mounting of bipods, laser devices, grips and other accessories. The Dan .338 can accommodate a suppressor - which was reportedly used during the SAS sniper mission in Syria. The scope shown here is a Meprolight Fire-Controlled Riflescope, a 10 x 40 optical sight with integral laser range finder
photo: IWI