This site uses cookies. By continuing to use this site you consent to our use of cookies. more info | ok
british special forces » news » elite police to guard Olympics
▼ share this page

Special combined response firearms teams will be ready to respond to any terrorist threats at the London 2012 Olympics, it has been revealed.

It is feared that the high profile games will provide a tempting target to terrorists. The new elite Police force will be on standby to counter a range of scenarios, including hostage taking, armed sieges, snipers and Mumbai-style attacks by gunmen.

The combined response firearms teams will be made up of officers from the Met's elite CO19, augmented by dog handlers, officers trained in directed searches and hostage negotiators. The response teams form one of three layers of security for the Olympics; the others comprising plain-clothes close protection officers and uniformed patrols.

Details of what role, if any, UK Special Forces may play in guarding the Olympics have not been made public. Both the SAS and SBS have teams on standby to respond to terrorist threats in the UK. Even if no UKSF personnel are actively deployed during the events, it is likely that these units would at least play an advisory role. UKSF have previously shared their expertise with other nations holding the games. In 2004, UKSF provided security advice to Greek authorities for the Athens Olympics (telegraph report). 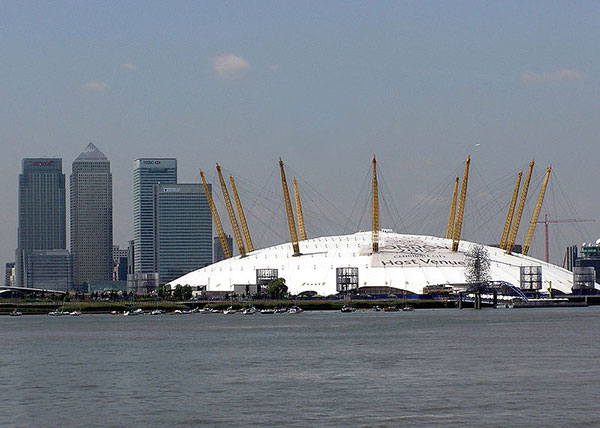 The O2, one of the venues for the upcoming games. The SBS's expertise with martime counter-terrorism would make them an ideal candidate to advise on securing the approaches to such a site.
photo by wikimedia user arpingstone | public domain | used with thanks