This site uses cookies. By continuing to use this site you consent to our use of cookies. more info | ok
british special forces » news » SAS Successes Against Al Qaeda In Iraq Revealed
▼ share this page

The Daily Mail has revealed details of 2 UKSF operations against Al Qaeda terrorists in Iraq.

The newspaper reports on UKSF operations against Maher Ahmed Mahmoud  az-Zubeidi, better known by his alias Abu Rami, and Abu Uthman. Between them they were responsible for hundreds of terrorist attacks in Baghdad and other parts of Iraq.

In the 2nd half of 2008, D Squadron, 22 SAS, were in Iraq on a 6-month deployment with Task Force Black, a UK special forces task group. They were stationed in Baghdad, alongside their American counterparts, Delta Force. Delta had had no luck in the search for with Rami or Uthman. Eventually, US commanders were persuaded to let British special forces in on the hunt.

The SAS ran a number of operations in which suspected terrorists and associates were rounded up in order to gather human intelligence (HUMINT) from the detainees. These events led to an undercover operation in which a UKSF operative posed as a used car salesman in the Rusafa district of Baghdad. Disguised as a local, the operative developed a number of local sources. Intel from this operation led to the identification of a brother of Abu Rami who was being held at Camp Bucca, a U.S. detention center. The Special Reconnaissance Regiment set up a surveillance operation at camp Bucca and when Rami's mother visited her son there, they placed a tracker in her mobile phone which allowed her movements to be traced. Undercover units subsequently kept her and her associates under surveillance. When Abu Rami returned to visit his mother for the festival of Eid in early October, a Task Force Black team was mobilized. They surrounded and stormed the house Rami was in, resulting in his death.

Abu Uthman - also known as Salim Abdallah Ashur al-Shujayri or simply, 'the Tiger' - was captured by the SAS 3 months earlier than the killing of Rami. Uthman was responsible for the killing of Margaret Hassan and the kidnapping of peace activist, Norman Kember, later rescued by the SAS. Uthman was also being hunted by Russian special forces for his part in the slaying of 4 of their diplomats in 2006.

Intelligence gleaned from Task Force Black HUMINT operations eventually led to a close associate of Uthman, called Yassin. Yassin's house was raided by an SAS team who kept him and his family under guard until he was contacted by Falah, Uthman's number 2 man, who instructed Yassin to meet with Uthman at a Mosque. An SAS team drove to the mosque in a minivan and, amidst a Mexican standoff with Iraqi policemen, apprehended Uthman. 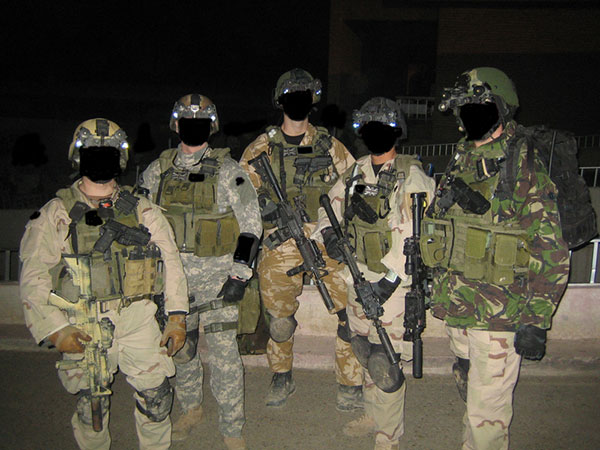 SAS / SFSG operators with Task Force Black. TF Black carried out numerous operations against Al Qaeda and insurgent forces in Baghdad and other parts of Iraq until withdrawal in 2009.