This site uses cookies. By continuing to use this site you consent to our use of cookies. more info | ok
british special forces » news » sas gulf war 2 raid revealed
▼ share this page

Details of a Special Air Service (SAS) raid at the beginning of the 2003 Gulf War have been revealed. The Daily Mail has published a report (1) on Operation Row, which took place on the night of March 17th, 2003, a day before parliament debated wether to approve Britain's role in the US-led invasion of Iraq.

According to the newspaper, Operation Row's objective was to storm Al Qa’im, a town on the Euphrates river, in the western Iraqi desert and close to the Syrian border, from where it was believed that Saddam Hussein may be preparing to launch a WMD attack against Israel. Al Qa'im was defended by a large number of Republican Guard units and had previously been used to fire SCUD missiles at Israel.

During the night of the 17th, an initial wave of soldiers from D Squadron, 22 SAS were inserted into a desert LZ by Chinook helicopters flying from a base in Jordan. A second wave of Chinooks followed and delivered D Squadron's Mobility Troop, along with their armed 'Pinkie' Land Rovers. D Squadron dug in and waited for reinforcements from B Squadron, who had infiltrated across the Jordanian border in Land Rovers. B Squadron arrived at the LZ on the night of the 18th.

In the early hours of the following morning the SAS task force began probing Al Qa'im's defences, focusing on the town's water treatment plant, believed to be a possible WMD site. A massive fire fight ensued as the SAS raided the plant, then later withdrew.

B and D Squadrons continued operations on the night of the 19th, when the war officially started with a massive aerial bombardment by allied aircraft. In a reprise of similar operations in the 1991 Gulf War, SAS Land Rover columns moved out into the desert to carry out reconnaissance and ambush operations.

These revelations from the Mail add to the picture of what is publicly known about SAS operations during the invasion of Iraq, which are few and far between. Numerous first-hand accounts have been published regarding the SAS's role in the 1991 Gulf War. The MoD has since required all special forces soldiers to sign non-disclosure contracts that have stemmed the flow of such stories. What is known is that British, Australian and U.S. special forces were all active in the Western Iraqi desert. There were also elements active in the North, having come down through Turkey. Saddam Hussein was forced to deploy significant forces to counter them instead of facing the main allied push, that came up from the South. Allied special forces secured a number of airfields in the desert which became bases of operations for subsequent special operations. The SAS continued operations in the desert, until the invasion phase was complete. The Regiment then deployed elements to Baghdad. The commitment to the Iraqi capital would evolve into Task Force Black, which fought a six-year long counter-insurgency campaign before withdrawl in April 2009. 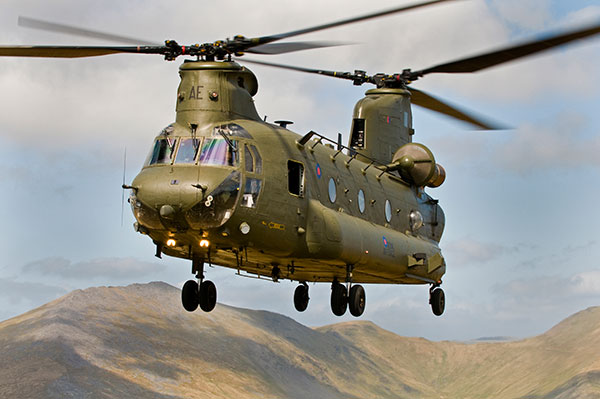 The D Squadron contingent for Operation Row were airlifted into place by RAF Chinooks (likely from 7 Squadron Special Forces Flight). Each Chinook can carry up to 55 troops. A single SAS Land Rover can be carried inside in its cargo bay..
Image by Ian Forshaw | © UK MOD / Crown Copyright 2011 | used under open government licence