This site uses cookies. By continuing to use this site you consent to our use of cookies. more info | ok
british special forces » news » sas sangin combat
▼ share this page

British Special Forces have been engaged in combat operations against the Taliban in Helmand Province, it has been reported.[1]

As was recently reported, a small number of United Kingdom Special Forces (UKSF) were deployed to Helmand in response to Taliban gains in the Sangin area. The official position was that the British troops were operating strictly in an advisory role to local forces and would not be operating outside of the wire of their camp. The Mail On Sunday now reports that an SAS/SBS team has carried out at least one night raid alongside Afghan troops in which 20 Taliban soldiers were killed.

The report describes how, on the night of the 22nd of December, a UKSF unit took out a Taliban checkpoint on the road between the town of Sangin and Kajaki. The action was part of a larger picture of attacks throughout Helmand that night involving British, American and other special forces units working with Afghan troops.

The Mail has published a grainy photo that it claims shows a number UKSF operators and Afghan troops, said to be taken after a recent battle in Sangin. They claim it shows the type of uniforms, gear and weapons that UKSF are thought to carry. The men appear to be armed with C8 carbines (or M4s), and interestingly, a SCAR-H rifle. The SCAR-H is a 7.62x51mm weapon thought to be considered for use by UKSF due to its improved firepower compared to the 5.56x45mm C8. If the soldier in the photo is UKSF, then this would be the first indication that the SCAR-H is in frontline use. 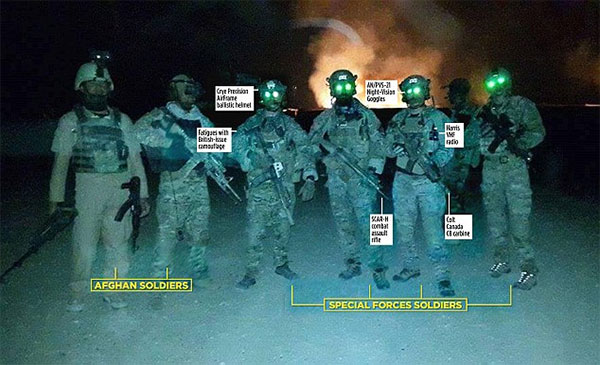 Photo purporting to show British Special Forces posing for a photo after a recent operation in Helmand Province.

It should be noted that rather than UKSF operatives, the photo could be showing troops from another non-Afghan unit such as the Canadian unit, Joint Task Force 2 (JTF 2). JTF 2 would also be carrying C8 carbines and similar kit. US and other special forces units carry the M4 carbine, which would be hard to distinguish from the C8 in a grainy photo such as this. The SCAR-H is in wide use among US special operations forces.

Fighting is taking place in the Sangin area, a strategically important location that is now largely under Taliban control.