This site uses cookies. By continuing to use this site you consent to our use of cookies. more info | ok
british special forces » news » sas want ammo upgrade
▼ share this page

British Special Forces are about to get an upgrade in firepower, it has been reported(1). Unsatisfied with the range and stopping power of 5.56mm x 45mm ammunition, the Special Air Service is looking to adopt personal weapons that fire heavier 7.62mm x 51mm NATO rounds.

British forces switched from the 7.62mm L1A1 rifle to the 5.56mm L85a1 in the mid-eighties. One of the reasons for the switch to 5.56mm was that, due to its size and weight, more bullets could be carried per man than the heavier 7.62mm rounds. Weapons chambered in 5.56 tend to have a bigger magazine capacity also - 30 as apposed to 20, as is the norm with 7.62-chambered rifles. Special forces had ditched the L1A1 in favour of M16s long before the rest of the army. When operating far from the front line, the ability to carry more ammunition was deemed more important that any failings that the lighter round may have. The Regiment still fielded 7.62mm rifles when deemed necessary. During the Troubles in Northern Irelans, for example, various incarnations of the Heckler and Koch G3 were used by 22 SAS and the SAS-trained 14th Intelligence Company (The 'Det').

Experience in Afghanistan, however, has shown that the 5.56 rounds fired from the C8 SFW carbine, the Regiment's standard rifle, come up lacking in that theatre. It can sometimes take multiple hits to put down an enemy fighter. Developed to fight more conventional forces, one of the expected consequences of the 5.56 round was to result in a wounded enemy soldier, thereby taking them out of the fight and requiring several comrades to treat him on the field, and more men and resources to continue treatment off the field. This strategy is not so suited against fanatical, irregular forces. Insurgents in battles in Afghanistan have been able to keep on fighting after being hit by 5.56 rounds. Special Forces engagements tend to be quick and decisive, requiring a round with one-shot, one-kill characteristics, like 7.62 NATO.

Another issue with the current caliber round is range. Taliban insurgents are typically armed with weapons that fire 7.62mm rounds and can engage out to longer ranges than troops armed with 5.56mm caliber weapons. Knowing this, the Taliban will often try and exploit this advantage and engage in fire fights from beyond their targets' effective assault rifle range. The MOD has introduced the L129a1 Sharpshooter rifle into infantry squads in order to enable British forces to lay down accurate return fire in long range engagements.

The Daily Mail reports that the SAS is trialing several 7.62mm x 51mm caliber rifles as replacements for the C8 SFW:

The SCAR-H, a modular weapon system that can be configured as a carbine, assault rifle and sniper rifle, is reportedly being considered by the SAS. The SCAR-H is used by U.S. Special Operations Forces, including the Navy SEALs. 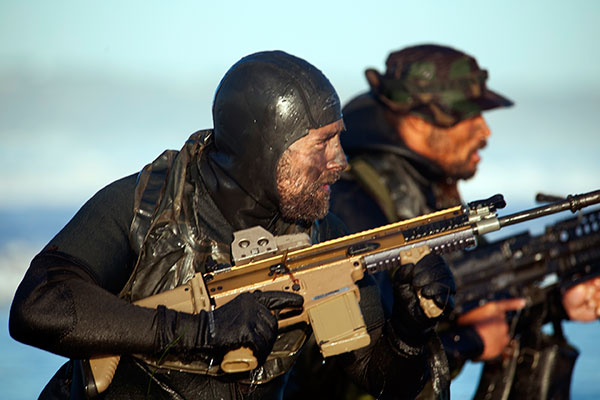 A U.S. Navy SEAL armed with a SCAR-H (MK 17 Mod 0). The SCAR-H can be fitted with a 13, 16 or 20 inch barrel. It features rails for mounting accessories such as scopes, laser pointers, grenade launchers and fore grips. The weapon is fed from a 20-round box magazine.
U.S. DoD photo

Although not mentioned in the Daily Mail report, another likely contender is the Heckler and Koch HK 417. Like the SCAR-H, the HK 417 comes in a range of flavours - short-barreled carbine, assault rifle or sniper rifle. The HK 417 is thought to already be in limited use in the by the SAS(2) and SFSG(3). 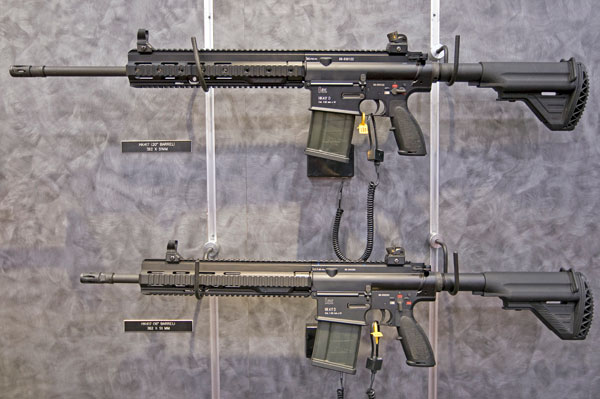 2 versions of the HK 417 on display - the assault rifle, with 16 inch barrel (top) and a version with a 12 inch barrel, designed for close quarters combat (bottom). The HK 417 is the 7.62x51 version of the 5.56x45 HK 416, a rifle used by Delta Force, the U.S. Army Special Ops unit modelled on 22 SAS.
Wikimedia photo : Bryan William Jones, Ph.D.
used under Creative Commons Attribution-Share Alike 3.0 Unported licence