This site uses cookies. By continuing to use this site you consent to our use of cookies. more info | ok
british special forces » gear » boats » rigid hull inflatable boats
▼ share this page

Rigid Hull Inflatable Boats (RHIBs or RIBs) are designed for operations on the open sea and in coastal waters. The Royal Marines, SBS and SAS Boat Troop use RIBS for a range of roles, including Maritime Counter Terrorism (MCT), ship-boarding, counter-piracy and counter-narcotics.

RIBs used by the Royal Navy are manufactured by BAE Systems Halmatic. They come in a range of sizes (28, 24 and 22 feet long) and in both Arctic and Pacific variants. The Arctic boats are powered by petrol-driven outboard motors whereas the Pacifics employ an inboard diesel engine powering a sterndrive or waterjet.

RIBs have v-shaped hulls made of Glass Reinforced Plastic (GRP) with a collar made of inflatable neoprene tubing around them to provide buoyancy. Decks are made of plywood. This design makes them light, fast and durable. It also means there is little protection from small arms fire for those on board. The RIB's v-shpaed hulls make them unsuitable for landing on beaches, limiting their role to boat-to-boat operations and general patrolling.

These fast and sturdy 28 foot long RIBs are used by the SBS for Maritime Counter Terrorism ops. Arctics have a gun mount at the bow that can be fitted with a HMG. Arctics can be transported on road via trailers, in cargo plane, carried under slung and dropped into the ocean from RAF Sqn 7 Chinook helicopters or even airdropped into the water from C-130J Hercules aircraft.

In November 2001, a combined force of SBS/SAS used Arctic 28s to storm the MV Nisha, a cargo ship suspected of carrying terrorists.

The standard sea boats for the Royal Navy and Royal Auxillary fleets, these 24-foot-long RIBS are used for rescues, patrols and boarding operations, including on counter-piracy and counter-narcotics missions. A GPMG can be mounted at the bow. 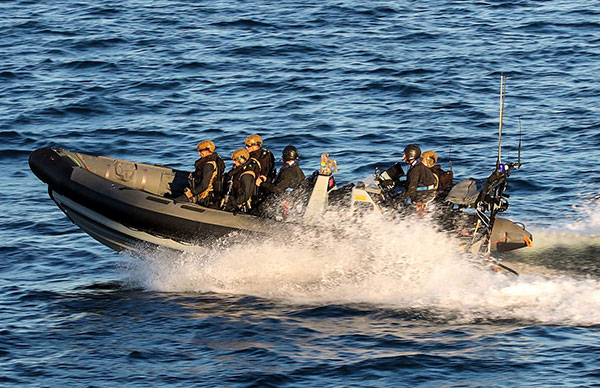 A Royal Marines boarding team (RMBT) made up of men from 42 Commando departs from HMS Duncan in a Pacific 24 RIB during a boarding exercise, Feb 2018. The Pacific 24 features an aft helm section and 'A' frame onto which a blue strobe light and various comms aerials are fitted. The boat features shock-absorbing seating for 6 passengers
NATO photo by GBRN LPhot Paul Hall 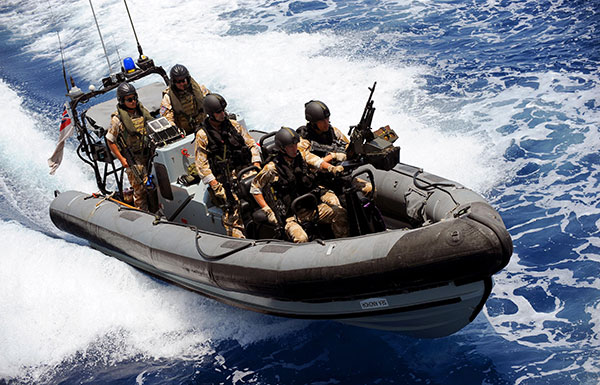 The Royal Navy also operates a small number of Pacific 22 boats, used as general sea boats. They have a smaller seating capacity and endurance than the 24 models. The boat supports carrying 2 crew and up to 13 passengers. The maximum hoisting weight, however, is based on 2 crew + 5 passengers. The Royal Navy has operated Pacific 22 since 1980. These were powered by a sterndrive propellor system driven by an inboard Mermaid Turbo 4 diesel engine. The Pacific 22 MK2 was introduced in 2000 and featured a Yanmar 4LH-STE 190hp inboard diesel driving a Hamilton HJ 241 waterjet. 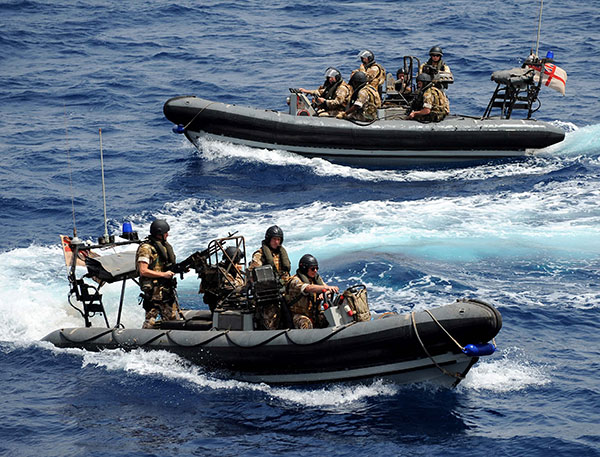 Royal Marines boarding teams from HMS Cornwall carry out anti-piracy operations aboard Pacific 22 RIBs in 2010. Unlike the Pacific 24 which has the helm station aft, the 22 has the helm station further forward. Note the GPMG mounted at rear.
Image by POA(Phot)Owen King | © UK MOD / Crown Copyright 2010
Used under Open Government Licence