This site uses cookies. By continuing to use this site you consent to our use of cookies. more info | ok
british special forces » weapons » HMG
▼ share this page

The L1A1 HMG is a .50 (12.7mm) caliber heavy machine gun. The HMG is a modernised version of the American-made Browning M2, which served with distinction during World War 2.

The belt-fed HMG fires at a rate of 485-635 rounds-per-minute to a range up to 2000 meters. HMGs are mounted on tripods and operated by a crew of 2. They can also be mounted to WMIK Land Rovers. The HMG is operated by both the Paras and Royal Marines. UKSF also mount the HMG on their Land Rovers.

The stopping power of the HMG's 12.7mm rounds is excellent and can take on light armour and soft skinned vehicles. The Royal Navy mount a variant of the HMG (M3M) to Sea Lynx helicopters during anti-drug-smuggling operations, where it's used to disable the engines on speed boats. It's believed that the Special Boat Service also mount twin HMGs to their VSVs (Very Slender Vessel), their new long range insertion craft. 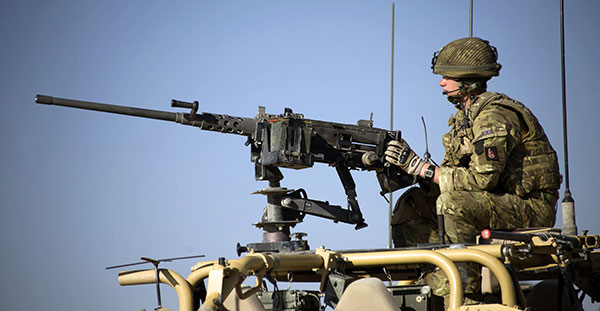 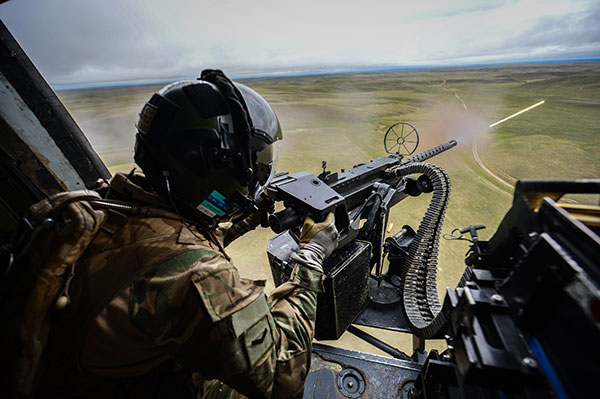 An Army Air Corps door gunner fires a M3M from a Lynx AH9A helicopter. The M3M is made by Fabrique Nationale Herstal (FN Herstal) and features a firing mechanism that fires from the open bolt, internal recoil spring and a perforated barrel jacket. The M3M system also featuresa soft pintle mount, spade grips, a feeding chute connecting the gun to a 600-round ammo box and a spent round chute. Note the round iron sights fitted on this gun. A night vision or other optical sight can also be fitted above the spade triggers.
Image by Sgt Mark Webster RLC | © UK MOD / Crown Copyright 2014
Used under Open Government Licence