Edward Michael Grylls, otherwise known as Bear Grylls was born on the 7th of June, 1974. 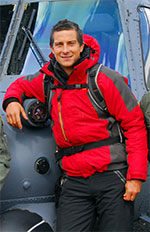 Now best known for his survival-themed televsion series, the adventurer Bear Grylls was once a member of UK Special Forces. Between 1994 and 1997, Grylls served in 21 SAS, part of the United Kingdom Special Forces Reserves. While serving with 21 SAS, Grylls was a trooper, survival instructor and patrol medic.

Some of Bear Gryll's achievements as an adventurer include :.