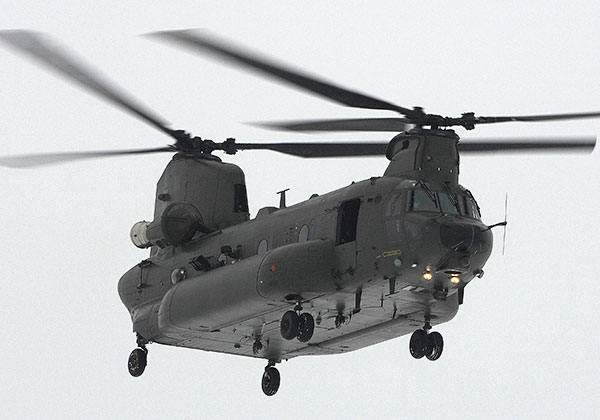 <<<28 of 56>>>^ gallery+ enlarge
A Chinook MK3 helicopter pictured in flight. The MK3s were initially earmarked for RAF 7 Squadron Special Forces Flight and were to be configured for special operations. They were to be fitted with enhanced engines, 'fat' fuel tanks and night-vision-compatible digital cockpits as part of a suite of advanced avionics which would put the MK3 on a par with the MH-47E Chinooks then operated by the U.S. Army's elite 160th Special Operations Aviation Regiment. Alas, a series of attempts to lower costs on the 8 MK3s resulted in a dispute with Boeing over the access codes for the supplied software and, after much expense and time wasted, a much dumbed-down MK3, retrofitted to MK2a standard, was finally delivered into RAF service, flying regular duties. The special forces flight still operate the MK2/MK2a airframes the MK3 was supposed to replace. The MK2 Chinooks flying special forces missions have been fitted with a 'night enhancement package' which includes a forward-looking infrared sensor, the display screen for which obscures the co-pilot's view out of the cockpit.