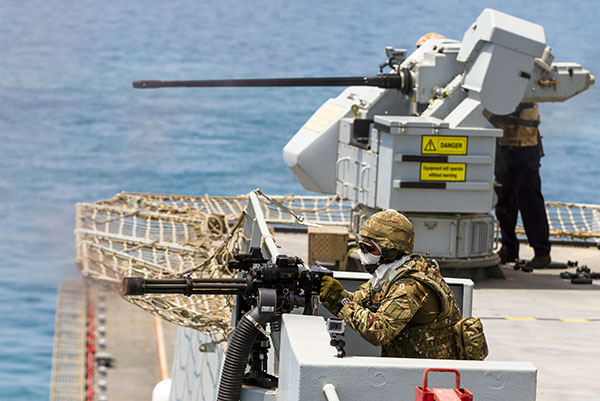 A Royal Marines Commando fires a Mk44 Minigun mounted on the RFA Cardigan Bay during an escalation of force exercise with U.S. Navy's U.S.S. Thunderbolt, June 2014.

The Mk44 is a ship-mounted 6-barrelled, electrically operated weapon that shoots 7.62mm x 51mm rounds at a high rate of fire (up to 6000 rpm). The Royal Navy and Royal Fleet Auxiliary employ the Mk44 as protection against small surface threats such as armed speed boats. The need for such protection was highlighted by the October 2000 attack on the USS Cole, a United States warship docked in a Yemeni port that was attacked by a small boat carrying explosives.

The RFA Cardigan Bay is a Bay class landing ship dock operated by the Royal Fleet Auxiliary (RFA). It is armed with 4 Mk44 miniguns, 6 GPMGs, 2 Phalanx CIWS, and 2 Oerlikon 30mm cannons on DS30B mounts (one of which is visible in the above photo.