This site uses cookies. By continuing to use this site you consent to our use of cookies. more info | ok
british special forces » news » british sniper sets record
▼ share this page

A Royal Marine sniper is the deadliest in the world, it has been claimed. It is said that the Royal Marine Corporal, who is still serving and has not been named, has notched up over 173 confirmed kills during deployment to Helmand Province, Afghanistan.[1]

It is reported that most of the British Marine's count was amassed during a single 6 month deployment (Herrick 5, November 2006 - April 2007). He was serving as part of 3 Commando Brigade's Brigade Reconnaissance Force (BRF). The BRF is an elite formation of recce specialists built around a core group of Royal Marines of the Brigade Patrol Troop (BPT). The BRF comprises of highly trained Mountain Leaders and Reconnaissance Operators, a number of whom are trained snipers.

Royal Marine snipers undergo a 13-week training course at Commando Training Centre Royal Marines (CTCRM), Lympstone in Devon. This course is recognized as one of the hardest in the world.

Royal Marine snipers hold the Platoon Weapon (PW) specialisation and may be deployed in a sniper section of a Commando's Recce Platoon. They typically operate in shooter/spotter pairs. 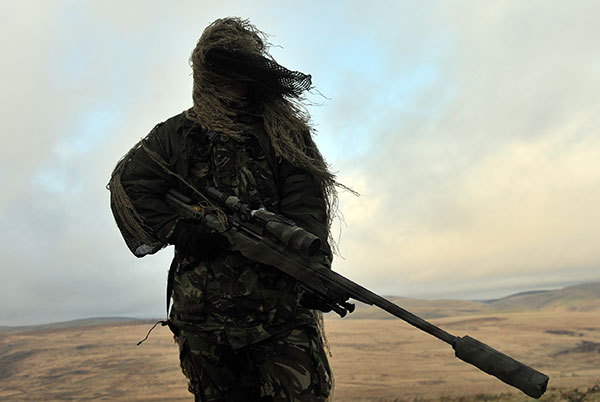 A British sniper armed with a L115A3 long range rifle. The .338 round fired by the L115A3 and its predecessor the L115A1, is devastating out to ranges well over 1000 meters. In 2009, a sniper with the Blues and Royals (Royal Horse Guards and 1st Dragoons) used a L115A3 to neutralise a Taliban combatant at a distance of 2,475 meters, setting the world record for the longest confirmed sniper kill. [2]

note: press reports state that most of the British Royal Marine sniper's kills were made with a L115A3. They also claim they were made in 2006 / 2007 which is before the L115A3 was fielded. It is more likely that he used the earlier L115A1 variant during his 06/07 deployment.
Image by Sgt Russ Nolan RLC © UK MOD / Crown Copyright 2010 used under open government licence